Since about 2006 I have been on a journey to make better fitting garments...that's easier said then done. Actually I haven't made any woven garments for quite sometime because I was so unhappy with the fit of the pattern I'd been trying. I've made a few jackets out of machine knit yardage and have sewn with Slinky quite a bit. Anyway I am more determined than ever to get to the bottom of my fit issues. Mostly I'm waiting for the Connie Crawford workshop. In the meantime I've said I wouldn't try on my own...but that is just not my nature.

Although I have a pretty extensive sewing library, I've been fretting over Vogue 8151, since at least December. I guess I should say that I absolutely love jackets /suits. Whether it be skirts or slacks I like having a coordinated outfit that I can pull right from the closet, throw on with matching shoes and be fabulous. So far in my foray to fit, I've made two muslins,and two out of fabic I just had laying around. For the last couple of days I've really been itching to sew something for myself but stressing about the fit. Last night I threw caution to the wind and got some decent fabric out of my stash and "went for it." After scrounging around for all my altered pieces I realized that I didn't have quite enough fabric. Not a problem, the sleeves are a little shorter than the pattern called for. I cut and marked the fabric and fused the interfacing in place. This morning I put it all together and other than some minor changes, I'm okay with it. I don't love it but with a little work on the pattern I could get there. 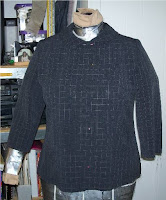 I think I need to make a high round back and a sleeve width adjustment. I'm about 85% pleased with the fit. As far as the pattern I liked it fine until I got to the collar. It didn't have a back facing. I don't know if I lost it or not but I don't like that extra bulk that is added when you have to snip into the upper collar at the shoulder seam and do a lot of folding back etc. then stitch down. The next time I make this jacket I'll make a back facing and eliminate that problem. Of course if I had been able to locate the instruction sheet that might have helped too! 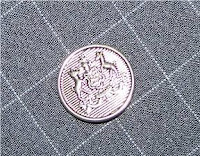 Then came buttons. Like more sewers I've got a stash that will last me to the grave. Dug through it and found the perfect button. Perfect until I realized I only have four. The pattern called for only four but I would rather use five because I like to make sure that I have a buttonhole at the fullest part of my bust so that there won't be any gapping. Try as I might, I couldn't located a fifth one. Maybe I'll just omit the top most button...I'm very flexible.
In all I've learned a lot. I was very surprised that the armhole I've worked out almost matches exactly the one for Connie Crawford's Butterick 5300. Then again the jacket does fit more like a blouse! Not really a problem because I didn't realize how lightweight the fabric was that I chose. I don't usually wear a blouse under my jackets anyway but a little looser fit might be better. It all a learning process.
I'm also still hammering away at my handknit discloths. I've made two this week. 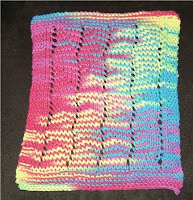 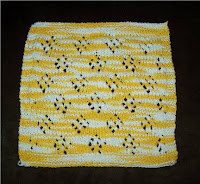 Posted by knitmachinequeen (KMQ) at 12:55 PM