There is a bra sew along going on over the net that is ending today. After watching "Double Divas" on TLC channel, I was inspired to get out my bra making supplies and give it a go.

Here's a couple of photos of areas I had to pick apart and re-sew. 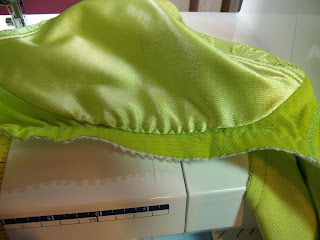 Sometimes it' doesn't pay to watch television and sew! 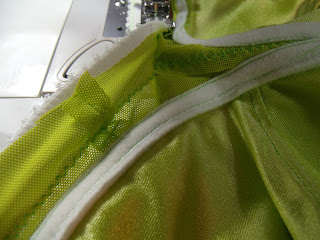 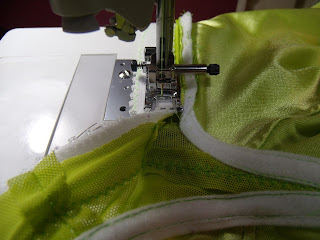 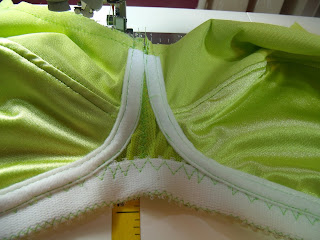 With patience and perseverance you can usually get it right! Thanks for watching.

Posted by knitmachinequeen (KMQ) at 9:26 AM 6 comments:

This is my first ever You Tube video. I'm testing the waters to see if this is something I might be interested in doing.


What are your thoughts on video posts? 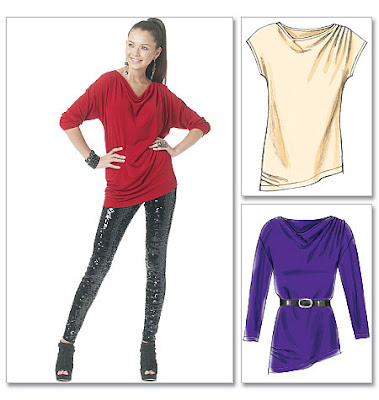 I'm still working on tops for the four pairs of leggings I made on New Year's day. This is McCalls 6241 but it almost wound up being wadder. 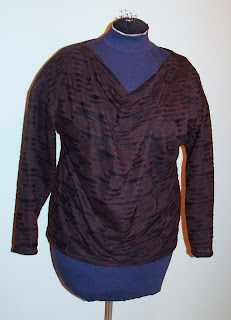 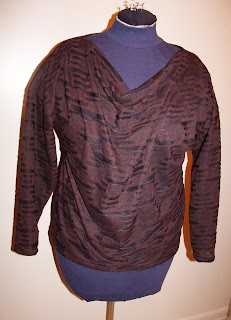 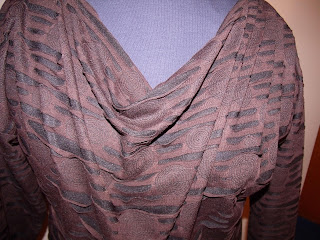 Why was it almost a wadder? I don't know why I didn't recognize that it was designed much like the Vogue 1250 Donna Karan dress that was all the rage a couple of summers ago. The pattern is super easy but I looked a HOT ASS MESS when I tried it on.

Just like the Vogue pattern, I had an enormous amount of fabric pooling right in the front just below the waist and onto the top of my thighs. The sleeves were super long and to add insult to injury, while sewing it I managed to bend the lower looper on my serger and break a piece off of the needle threader on my main machine! Is this thing cursed? Now both machines are in the repair shop!

I finally "Tim Gunned" it into submission and it is wearable. I wound up cutting 4" off of the bottom and it is no longer assymetric. It is super comfortable and I absolutely love the fabric. I wore it Friday and got lots of compliments. "Would I make it again, you ask?" Let's just say it is in the same trash pile that the Vogue 1250 pattern wound up in. I would not recomment this to others unless they had great success with 1250.

Happy New Year everybody! It's been a few weeks since I last posted but with the holidays and all I'm sure you all understand. Although not posting, I have been very busy sewing. As a matter of fact on New Year's Day I had a sort of sewing marathon! I sewed four pairs of leggings and one tunic. How's that for starting the new year off right??

There's no reason for me to review the leggings pattern, McCalls 6173, because everybody on the planet have made them. They are one of the few things that I sew almost entirely on the serger. I can make a pair from start to finish in 16 minutes. I've made seven pairs so far and think I'll give the pattern a rest until later in the year. I made two pairs of the leggings out of "Ponte Roma." Take my advice...add a couple of inches above the waist for "just in case." Luckily I'll be wearing mine with a tunic. If not there would be a considerable amount of "plumber's butt" showing. I don't want anybody to go blind! 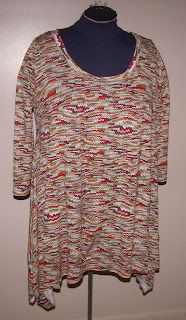 Pattern Description:
Misses tunics
Pattern Sizing:
4-22
Did it look like the photo/drawing on the pattern envelope once you were done sewing with it? Other than my using a print, yes.
Were the instructions easy to follow?
Didn't use them
What did you particularly like or dislike about the pattern?
I thought I liked the sharktail hem. In the end I think there is just too much fabric in the hip area for someone as "hippy" as I am. I don't hate it but I'm just kind of "meh" about it.
Fabric Used:
Rayon jersey
Pattern alterations or any design changes you made:
I made a 1" FBA adding a horizontal dart at the bust. Once it was cut, the rayon jersey "grew" faster than a teenage boy. Although I used Steam-A-Seam around the neck...it was a HOT MESS. I wound up cutting the original neckline off. I cut a 2 1/4" piece of fabric on the crosswise grain. I measured the pattern piece and cut the length 2" shorter. I re basted the neck using the "finger behind the needle" method to ease the neckline as much as I could. Having marked the shoulder seams on the neckband, while sewing, I slightly stretched the neckband to fit the tunic neck opening. To finish it off I used a double needle to stitch on each side of the neckband seam. 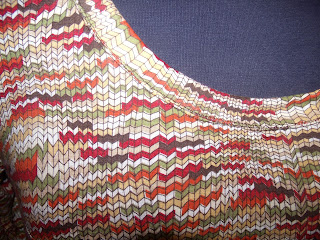 Beware that the underside of the hem shows in places so you'll want to finish it nicely. 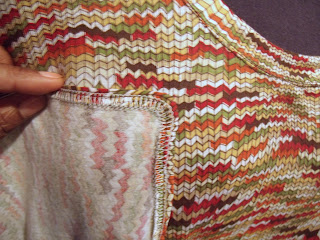 Would you sew it again? Would you recommend it to others?
I'm sure I won't sew it again. If I were younger I could probably get away with wearing it as a mini dress. Not how long I want the top to be. On the other hand it's a little too "artsy-fartsy" for me. If you're the type that likes wearable art or are drawn to the Marcy Tilton patterns, you'll probably love this.