It's hard to believe there are only six more days 'til Christmas. Since I've been married I haven't decorated at all. I stopped decorating the inside of my house years ago but rather concentrated my energy to the outside. So much that I had an electrician come in and add 2-20 amp circuts so I wouldn't burn the house down. Fast forward to marriage and a move to a house where my gravity fed iron was on the same circuit as the kitchen. Can you say nightmare? That put an end to my decorating. It's doesn't feel like Christmas without thousands of shiny lights.

I have not been doing any garment sewing because I am busy embroidering towels for bowling. Of course the machine had to act up on the first towel and I was reduced to removing most of the stitching. 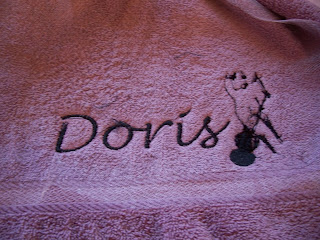 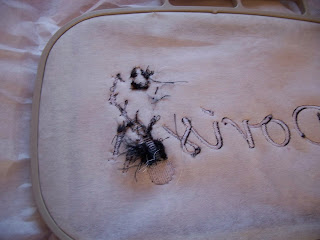 So far I'm up to 15. Some are for gifts for my teammates and others are for profit. Right now my sewing room looks like an episode of Hoarders or that somebody broke in and trashed it. How in the heck did four pairs of shoes make it back up here? I've acquired a couple of new pairs and absolutely could not get them into my shoe closet so I resorted to moving all of the summer shoes out to the garage. My shoe collection is outta control.

I'm still making greeting cards and if you haven't visited my other blog "I'm Black Martha" you don't really know the gift I have for creating with my hands. I sold $200 worth of cards last week without even trying.

Do you remember when I had a new desktop built earlier this year. Seemed like a good idea at the time but I wonder. The new computer is super fast and running Windows 7. Well my knitting and sewing software won't run with with Windows 7. Lucikly I have several older laptops around that I am able to still use for these programs. I could always upgrade the software but for the prices they want...I'm holding out as long as I can as in FOREVAH! My printer doesn't want to work with Windows 7 either. I guess the husband got sick of whining about it and went out and bought me a fab new wireless printer. Although I want to kill him sometimes...I love him to death.

That's all for now but take a look at my cutting table...ugh! 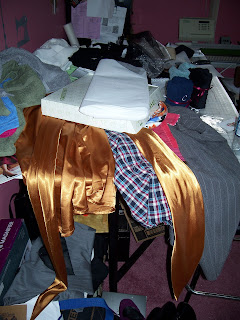 I'm not sure it could get worse.