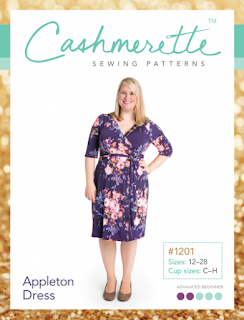 I am not an independent pattern person. I like to stick to the Big 4 because I already know most of the adjustments I'll need to make and because of the prices I can get them when they are on sale. When I saw that Jenny had designed the Appleton dress for curvy girls, I didn't hesitate to purchase a hard copy. I know that I'm not nearly patient enough to tape together 40 or more sheets of paper. Nope. Not ever going to happen.

The pattern arrived just a few days after I ordered it. I was shocked that the pattern is actually printed on tissue unlike Jalie which is printed on butcher-like paper. Initially, I wasn't going to trace the pattern but later decided to bite the bullet. It wasn't bad at all. There are only seven pattern pieces and I traced and trimmed them during an episode of Project Runway.

Soon after I received the pattern I realized there was going to be an Appleton Sew-along run by Carrie from the Cashmerette blog team. Well sign me up! Although I did get carried away soon into the schedule, I like how she mapped out the itinerary...

Every couple of days a blog post is made to help you along your way. A big thumbs up to this. The sew along is perfect for the beginning sewer or for a person that just needs a little hand holding to complete a garment. I also think it's especially good for someone with limited sewing time.

Based on the finished garment measurements, I chose the size 20 which is the same size I choose with Big 4 patterns. This pattern has tons of negative ease (8") and I wasn't about to set myself up for failure. I'm a mature woman (58) and I have a mature woman's body. I'm not a fan of showing my bumps, rolls, and back fat to the world!

The other concern I had was with how short the pattern is from shoulder to waist. When I posed the question on the blog I was told that I could just cut across the waist and add any length below that. Uhhhh...no. I've been sewing for 48 years and believe me I know lot. I know that if you have a detail at the waist like waist ties and you add length at or below it...that detail will still be in the same place. I guess wanting to put myself in a position as somewhat of a tester, I sewed the pattern as it was although I did add 4" at the hem. If you go to Pattern Review, nearly every sewers ties are much too high...just like mine are. It's not supposed to be an empire waist. Although the ties are supposed to sit at the high waist, high waist is very subjective and nowhere on the pattern does it suggest or mention the high waist.

The fabric I used has been in my stash for at least six years. It was from the JoAnn's Red Tag table so I'm sure I got it for a steal.

Again although I was supposed to be following the sew along, once I got started, I couldn't stop. I think I spent about five hours sewing. That included watching television, playing with the dog, stopping to record a short video using my loop turner and probably some internet surfing. Other than the hems, I sewed the entire dress on my serger. The seams are 3/8" and I put a reminder in RED on every pattern piece lest I forget and revert to the old 5/8."

I followed the directions exactly even adding the clear elastic at the shoulder, although I didn't follow the pattern layout. The directions are very well written with very good illustrations. The only changes I made other than lengthening 4" as well as lengthened the ties, were to sew the side seam all the way up and added a buttonhole for the left tie to fit through and I added thread belt loops to keep the ties in place. I did sew the buttonhole and thread loops lower in an effort to not have the ties directly below my breast but it barely helped.

So what is my take on the Cashmerette Appleton dress? I give it five stars. It is well drafted I didn't have to do an FBA. But just like the Big 4 few will be able to fit it right out of the envelope. Be warned unless your torso is very short, the ties will be too high. Also it is a deep V-neck which translates into more cleavage showing than I'm really comfortable with. Marking a larger size wouldn't help because the nature of a wrap dress us that it crosses over and under your bust. The good thing is just as the pattern touts...it doesn't gape.

Would I sew it again? Yes, as soon as I find another fabric in my stash with enough yardage but only after I add about 2" somewhere above the waist. Below are some construction photos and a few with me all "Appleton-ed" up. I wish the photos of me were better but it was freezing outside, the wind was blowing, the photographer was impatient and the dog kept trying to photobomb! 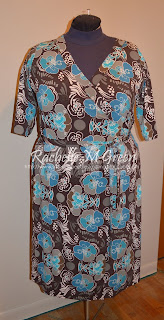 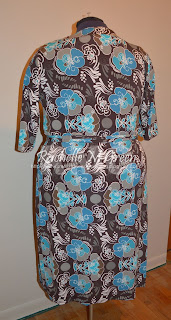 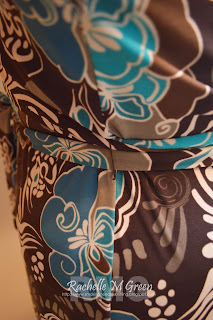 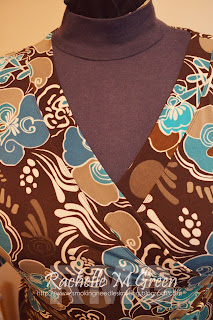 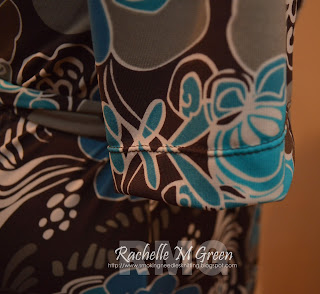 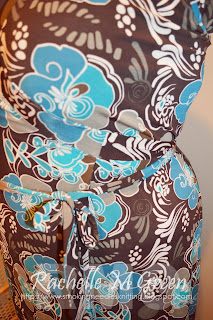