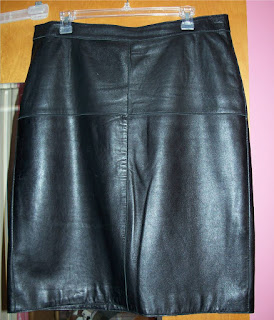 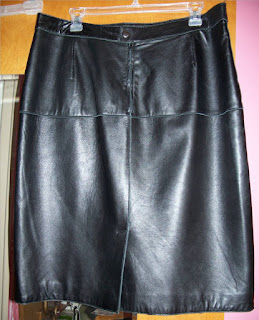 Wednesday night I got an idea in my head that I just had to try. I've had this Isaac Mizrahi leather skirt for about eight years and will admit that now it is waaay too tight. 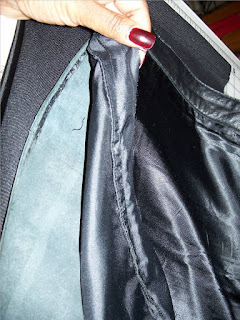 I used the leather back to draft a paper pattern to use for the new back lining and new back fabric. For the fabric piece,  I added a foldover waistband and  1 1/4" hem allowance. 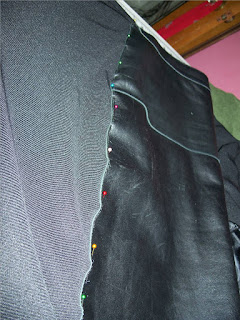 I pinned the front over the back pieces at the side seams into the previously stitched seam. Without using any special needle, thread or sewing machine foot, I stitched the front and back together through the original stitching line. 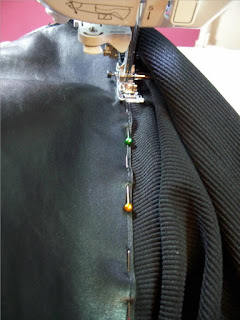 It was actually very simple and came out exactly like I envisioned. 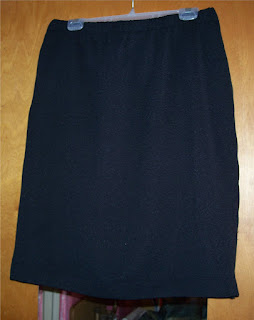 I'm sure I've seen this look in RTW but I think it was a pair of jeans. Although I don't have a photo of me in my newly refashioned skirt, it is a perfect fit and now we get lots of wear.

I got the job!

That's right. Had I checked my phone I would have known that they called almost immediately after I left the interview! I start Thursday. The husband doesn't like the fact that I'm going to be working full-time but he'll just have to get used to the idea. For the last three years I've only worked part-time. I'd just had enough of working with unprofessional managers. 'Nuf said.

In my last post, Scrapyard Butterfly asked, "Is there a bra pattern you recommend?"
I can't recommend any particular pattern because I'm still in the beginning stages of learning to sew them myself! I am using Ann St. Clair's pattern, the Queen Bra Elite. It is apparent to me that her patterns are to be sewn with her fabric. She offers kits. Beware. The instructions leave a lot to the imagination. Even with my years of sewing experience, I'm not sure I could have been successful with the pattern had I not taken her workshop. The first pattern she drafted for me was too small; the second one too large. I drafted the final pattern which did fit. So you see, even a fitting "expert" doesn't always get it right!

With the little experience I've had sewing bras, three successes and three failures, I've learned that the bra patterns that are on the market are much like ready-to-wear sizing. Each designer determines their own sizing and there is absolutely no uniformity from one designer to another. As I learned from my most recent foray, fabric choice is also crucial to the correct fit. The very nature of a bra makes it impossible to know if it will fit until it is fully constructed. That being said, altering a bra after it has been constructed is nearly impossible.

I'm not giving up. The bras that I consider successes are extremely comfortable and I want more. The only reason I'm exploring other patterns is because the Ann St. Clair pattern has the seam in a position that I don't particularly care for. Stay tuned. I'll be working on a bra later today and will keep you posted.

Labels: I got the job

First I haven't made any progress on my muslin for Vogue 1257 because when I got ready to sew, I couldn't find the envelope or the instructions! WTH! I have searched high and low to no avail. Now I'm just waiting for JoAnns to have them on sale so I can purchase and another copy. 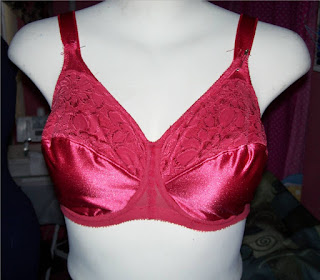 In the meantime, I made another bra. Yippee! Maybe not. It was all for naught. As I was sewing it my husband declared that my boobs were not as big as the bra looked. I thought it look big but figured by the time I sewed all the seams it would fit as perfectly as the last one I made. After all, it was the same pattern. Wrong. I used different fabric and it made a huge difference! There's no need for me to sew the straps because the bra fits me just like it does on the mannequin. I'm too old to use socks or tissue so I'll remove the underwires and chalk it up to experience! I'll not be deterred. I may even work on another one later today.

Today I was called in for a second interview for a position at a property managment company. They put a lot of emphasis on being professionally dressed. I thought the blond afro would be too much so this is what I wore.

The head guy kept commenting on how much education I had, like it was a bad thing! I don't think a Bachelor's degree is so much education. Could it mean that I'm over qualified?
BTW can you believe I'm 10 weeks post op on the total knee replacement and I'm already in heels. Yep. I'm not wearing them very long but I can walk in them without limping. The only difference is my stride it not as long as it used to be. Who cares. Diva's shouldn't be hurried!

Last Saturday I had every intention of working on a muslin of the Vogue dress I last blogged about. After performing my wifely duties, I cut the pattern out of an absolutly hideous knit fabric I found in my stash. I think I bought it just for the purpose of muslins. Sewing it didn't happen because I found a mysterious lump in my armpit. My first thought was of course, was breast cancer. After totally freaking out the husband and myself, I spent the rest of the day thinking the worst. Sunday morning after closer examination, Dr. Husband decided it wasn't cancer but instead a boil. Whew! That made me feel much better and guess what? He was right! Well, on one hand he was right. It was not A boil but two boils. Yikes! Until they burst, there won't be much sewing goin on here.

BTW I know you all think mentioning my wifely duties was TMI. Get your minds out of the gutter! My Saturday wifely duties are making coffee first thing then patching jeans that no thrift store would accept and would better be used for rages except that the husband feels that an $8000 machine should at least be able to make the world's rattiest jeans like new! LOL.

Now would probably be a good time to review 2011 both sewing and otherwise.
Here are some of my favorite looks from 2011:

Who knows where my sewing will lead me this year. I'll just go with the flow. Thanks for stopping by.

Labels: The year in review

It's a New Year...Monday Musings

Although I haven't gotten a lot of sewing done recently, I did manage to finish a fully-lined version of Simplicity 2648. I used a black polyester garbardine from my stash -- ala LBD. Please forgive the wrinkles. 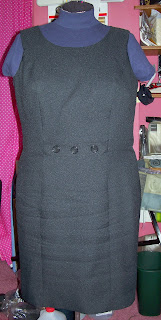 I also used Jessica's lining a sleeveless dress tutorial and let me tell you, it was spot-on. I highly recommend you bookmark the link. It was really convenient to have my laptop right next to my sewing machine. 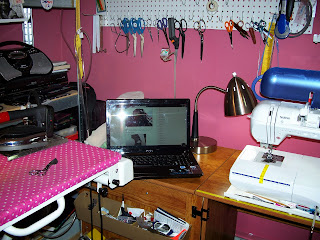 I'm still recovering from my knee surgery which is the main reason my sewing is suffering. In the past I was able to have marathon sewing sessions and while I won't be having any anytime soon, I expect my sewing to pick up substantially. In fact I am prewashing the fabric for my next project...Vogue 1257. Last summer I became fanatical about lining everything and that hasn't changed. I am going over in my mind how to line this dress as well. 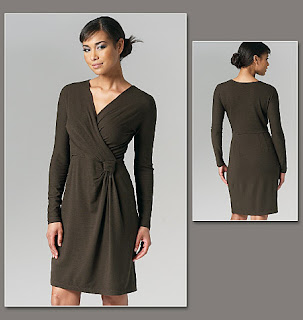 Posted by knitmachinequeen (KMQ) at 9:52 AM 4 comments: