Can You Help Me? 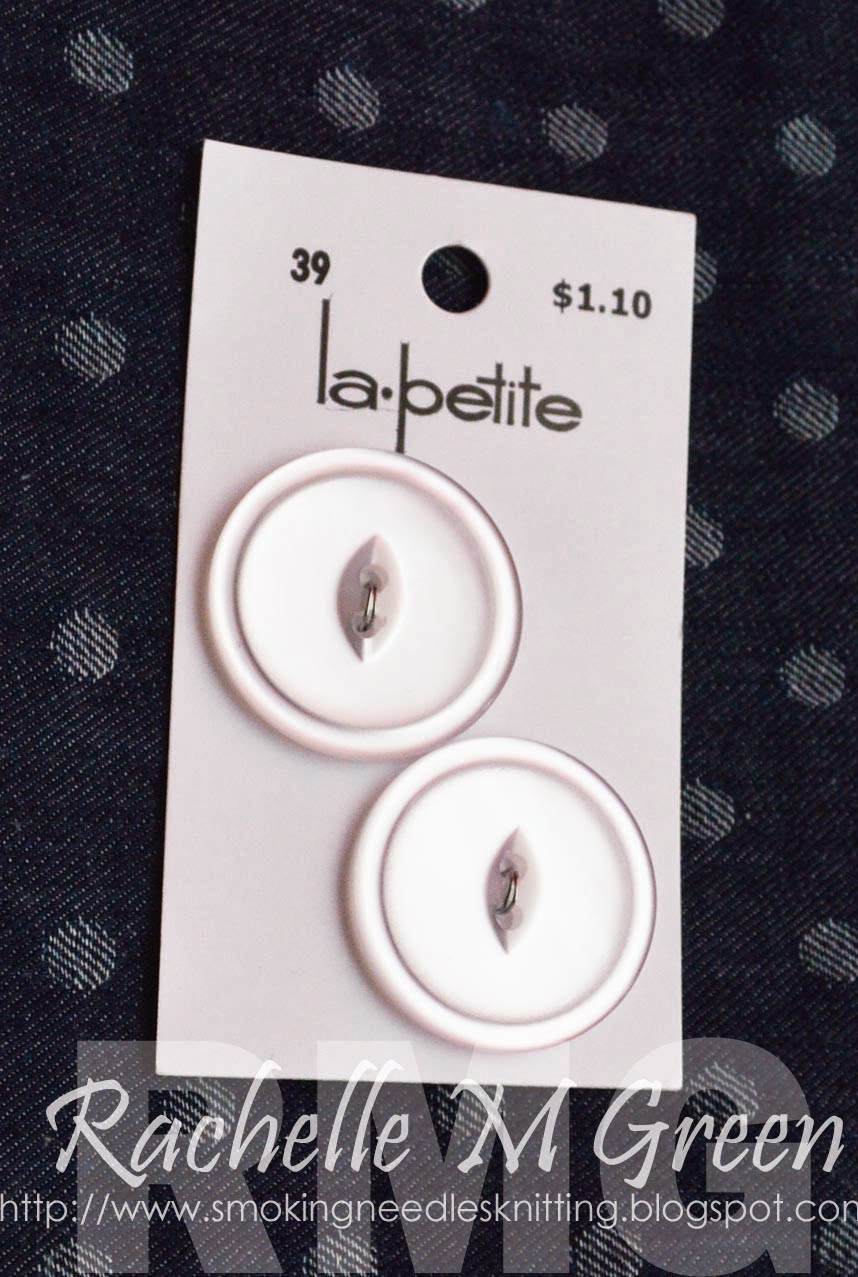 I desperately need your help. I have my heart set on using these buttons on my McCall's 5525 coat and wouldn't you know that I only have five of them I need one more. I've gone to both of my local JoAnn stores and they don't have any more. Could you check your stash or if you visit Joann's this weekend check the store? The button is 1 1/8". I so want to use these buttons. Please help me.
Posted by knitmachinequeen (KMQ) at 4:39 PM 13 comments:

Labels: Can You Help Me

Just wanted to offer up a sneak peek of my McCalls 5525 trench coat. 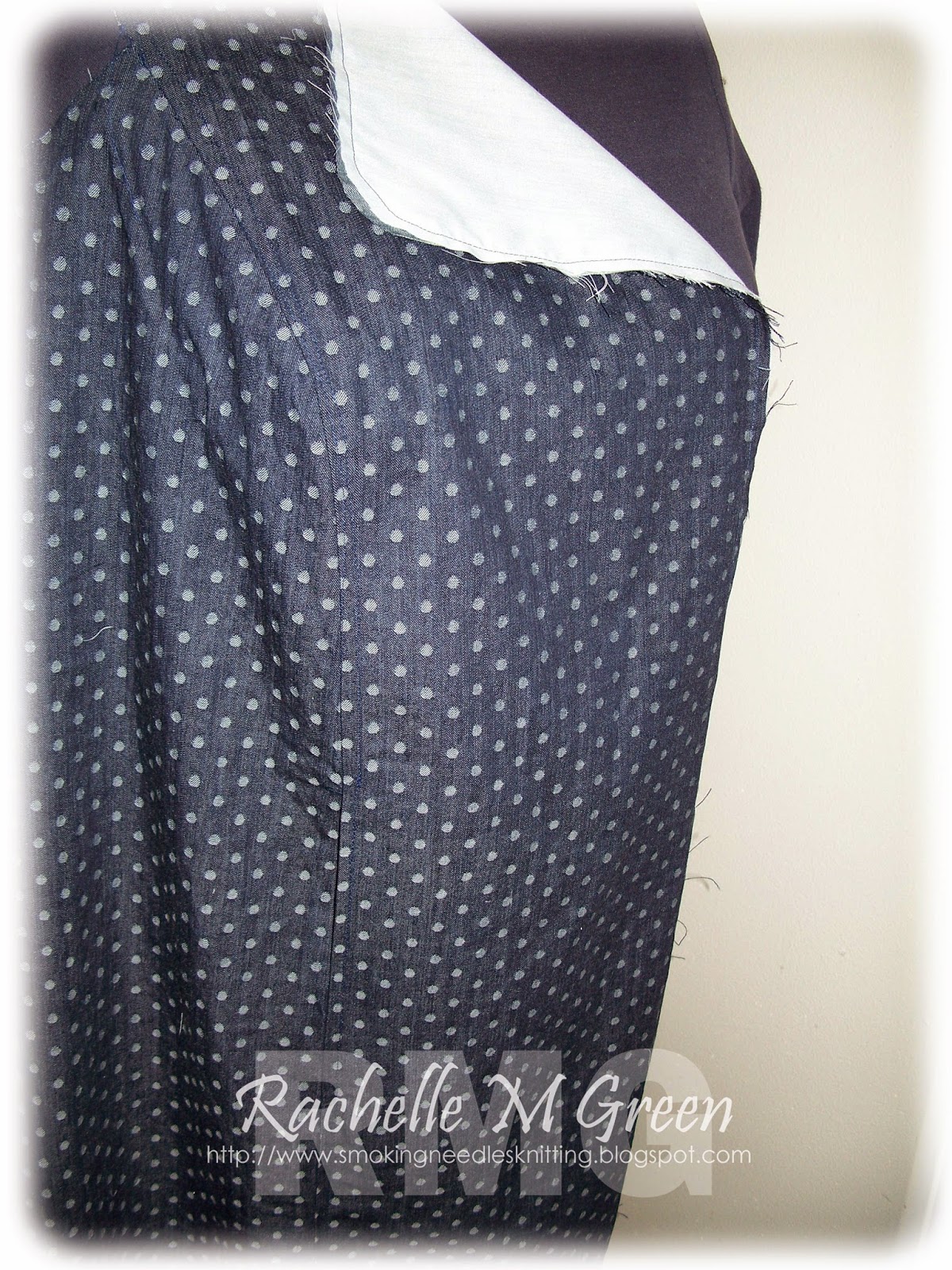 The fabric is  denim and although I washed it a couple of times...my hands have a blue tinge!

I'm working on my trench coat but would be remiss if I didn't sew something for Barbie as well. I rescued this Barbie last weekend from a friend who had relegated this doll to the donate pile! She is a 35th Anniversary "Vintage" doll. Of course she didn't look like this when I got her but I worked my magic and this is how she now looks! 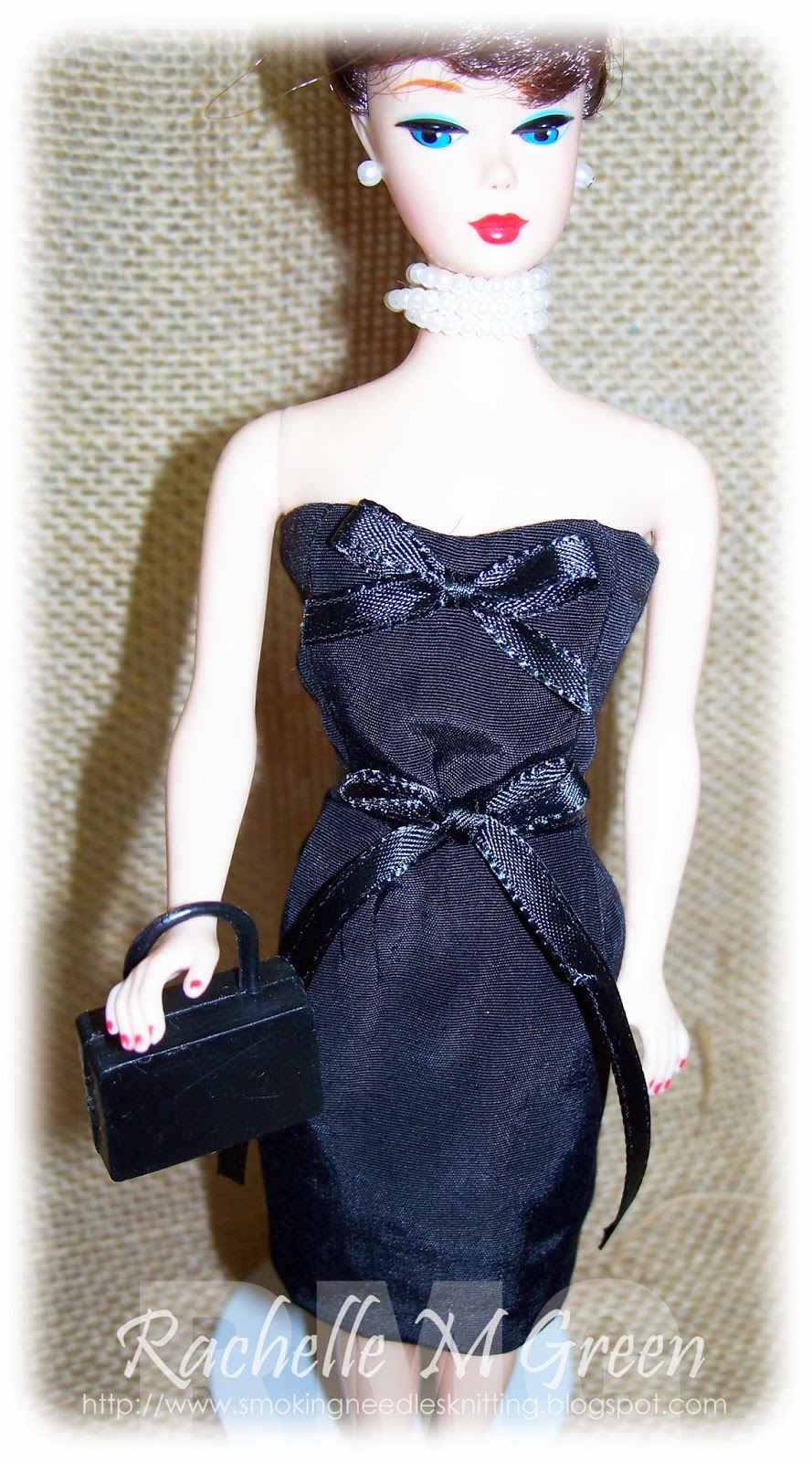 The fabric is from my stash and I have no idea of the fiber content. She already had on the earrings and necklace. The pattern is McCalls 6258 minus the straps. The shoes were actually pink but I colored them black with an alcohol marker. 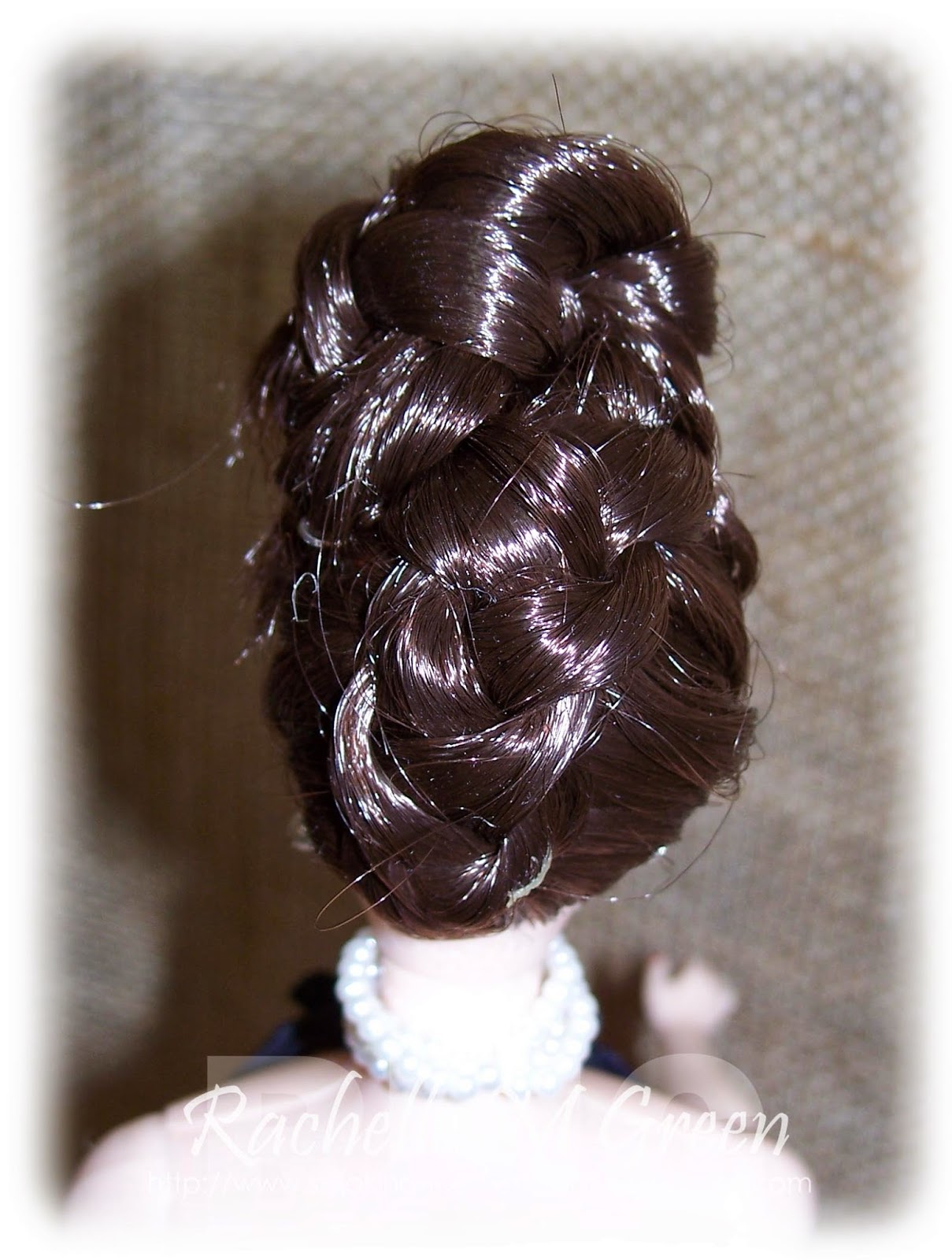 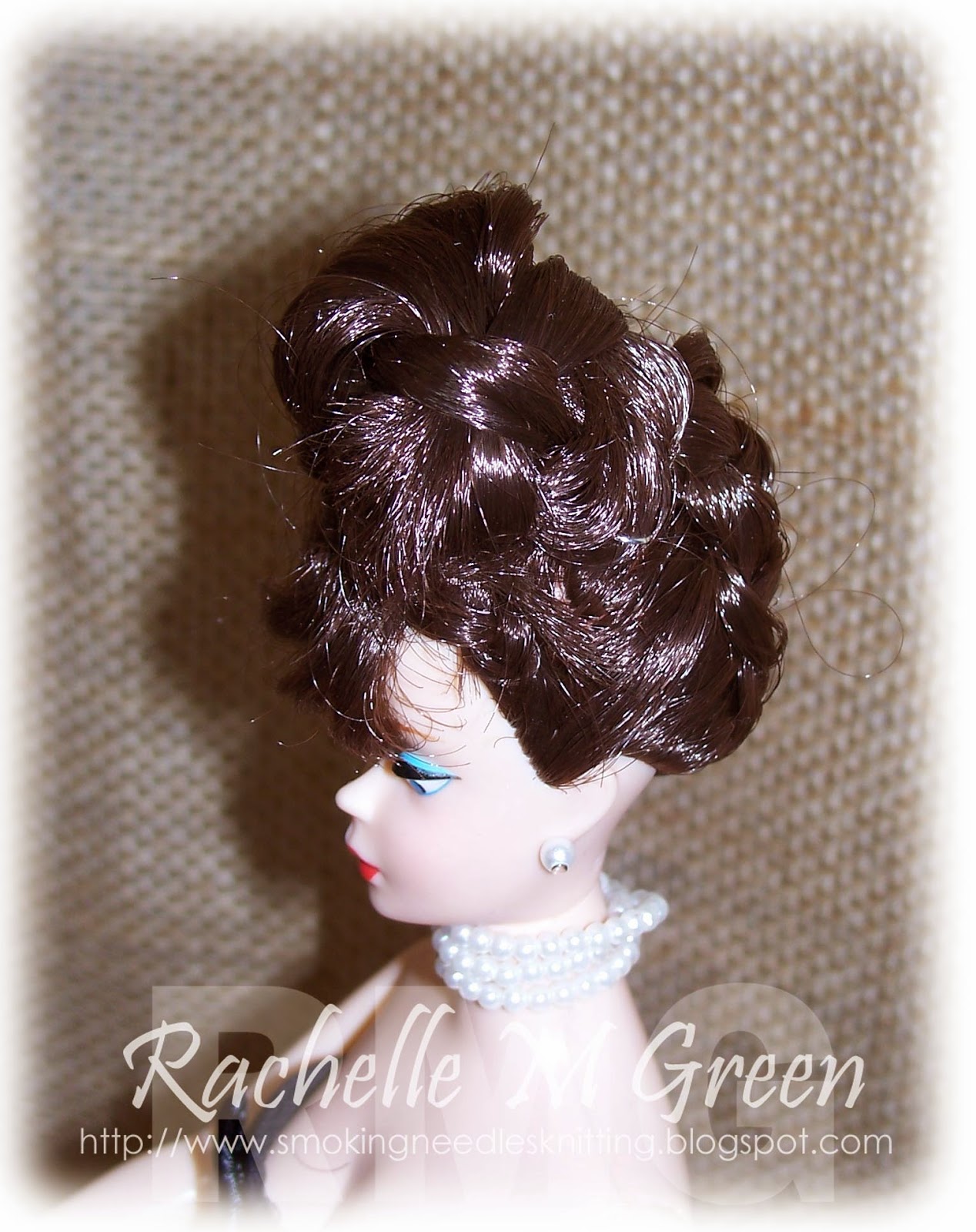 Close-ups of the braided up-do I styled. I'm glad I was able to add this doll to my already overflowing population!

That's right. There was no sewing this week. I'm trying to work out how I will place the pattern on fabric for a fitted blouse. I haven't quite worked it out like I want so I put it away and am working on a denim trench coat for Spring.


Barbie of the week 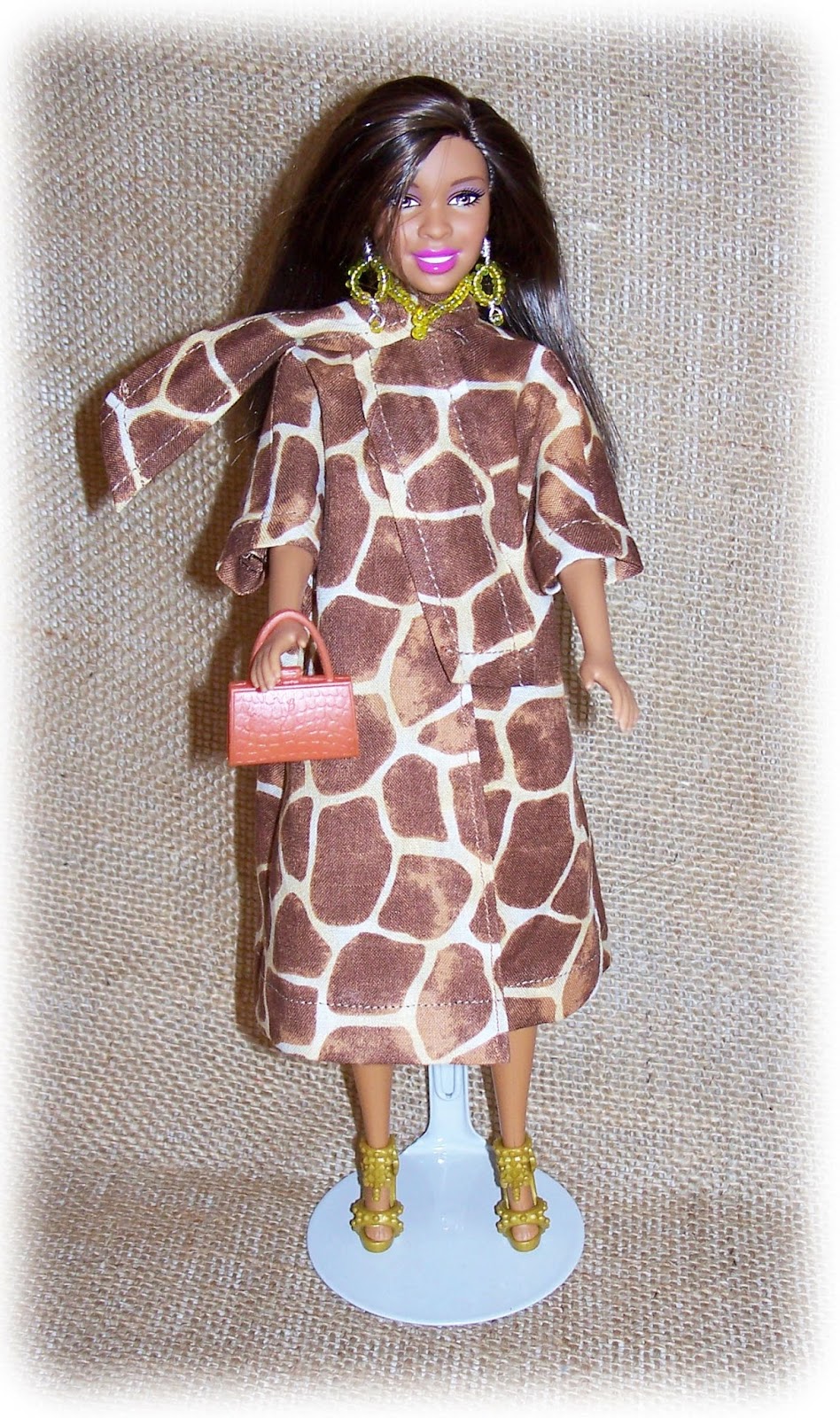 This Barbie has not been renamed but she's wearing her giraffe print 3/4 sleeve coat with attached scarf. The pattern is Simplicity 5785. The fabric is a fat quarter of quilting cotton. I made her earrings and necklace also. Recently people have been asking why I don't just buy the clothes. Actually Barbie clothes are so expensive but the quality of the fabric and the workmanship leaves a lot to be desired. As long as I'm in the mood, I'll continue to make my on doll clothes. When I no longer have the desire, I pack all the dolls back into the "Barbie Vault" the they'll have to be happy with what they have! Sew far you've seen 14 different Barbies. Have you been counting?

Labels: Barbie of the Week, No sewing here

Although Victoria extended Fearless February through March, I chose to stick with the original February 28th deadline. My last post featured this bear. 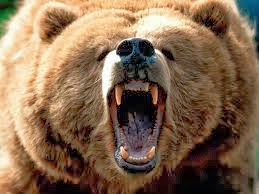 So what does he have to do with sewing? 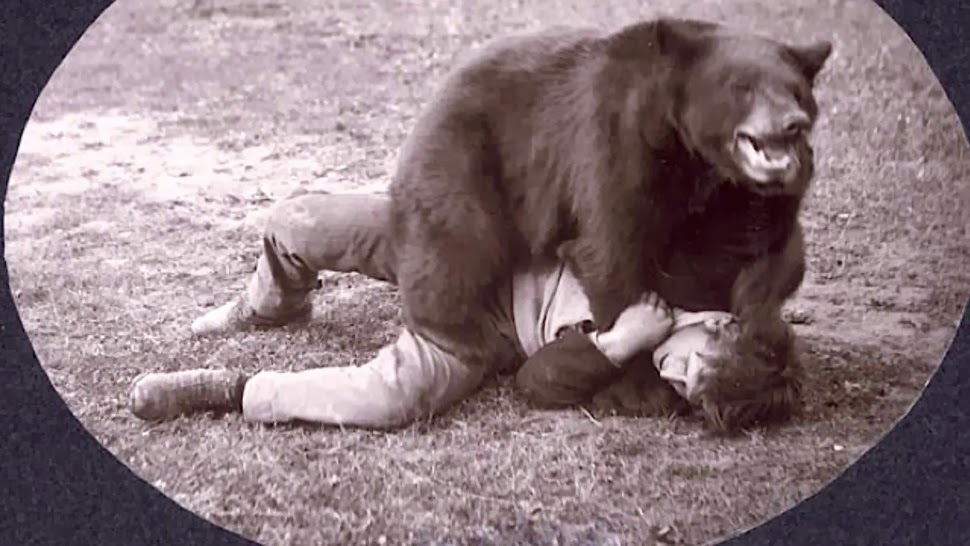 Well, I wrestled a bear and won! Actually I'm calling my Vogue 1320 coat "The Bear." Not in a bad way but in a "this coat is warmer and heavier than a bear" kind of way.

I'll have to preface this review by saying, try as I might, I could not get better pictures. Could have been operator error-- who knows. I picked the fabric up at an estate sale a few years ago and it was absolutely perfect for this project. The weight reminds me of an old army blanket I once had. The fabric would have been much too thick and heavy for anything other than a very simple style. 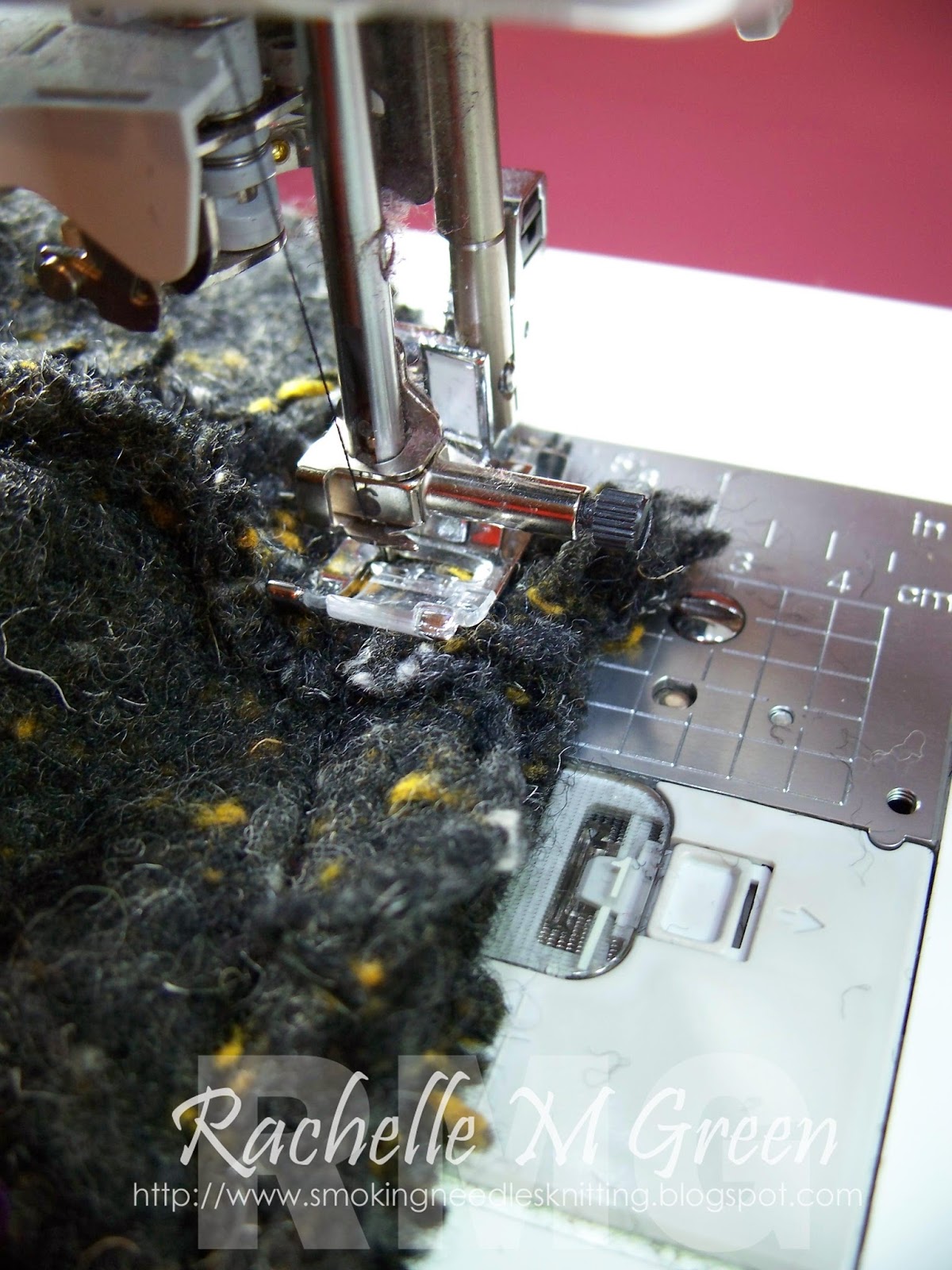 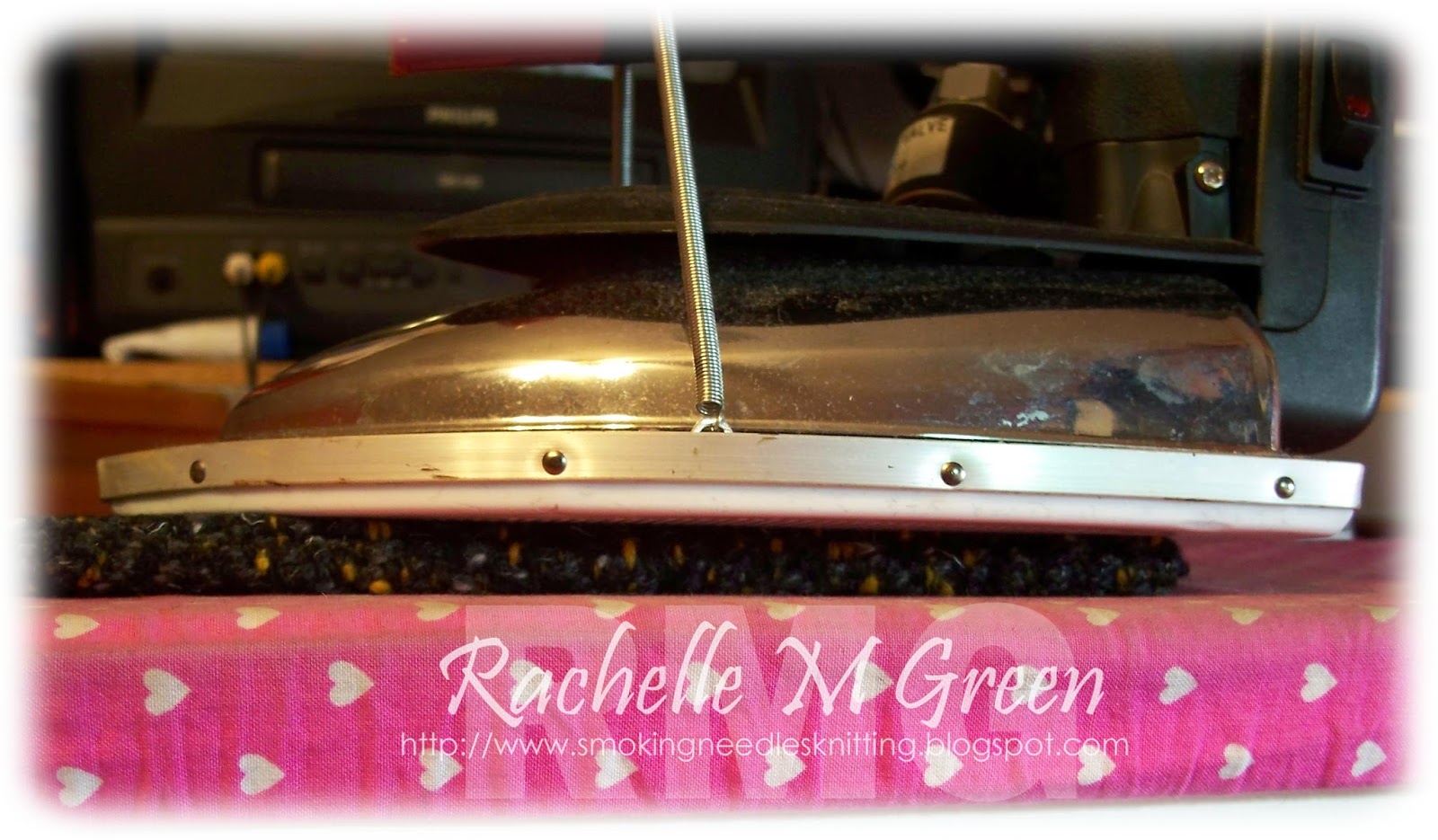 Vogue 1320 is simple enough for a beginner to attempt yet stylish enough for a seasoned veteran to be interested. I sewed it in the largest size (22) and am glad I did. In a less bulky fabric, I'm sure the coat would have swallowed me in any other fabric but in the fabric I chose it was the right choice.I was able to sew this coat in about a week. I think the pattern is very well drafted and especially love the sleeve shaping. Let me say it again. It seems like the sleeve was drafted especially for me! While I originally planned to change the collar, I'm glad I just followed the pattern. The collar is very warm and snuggly. 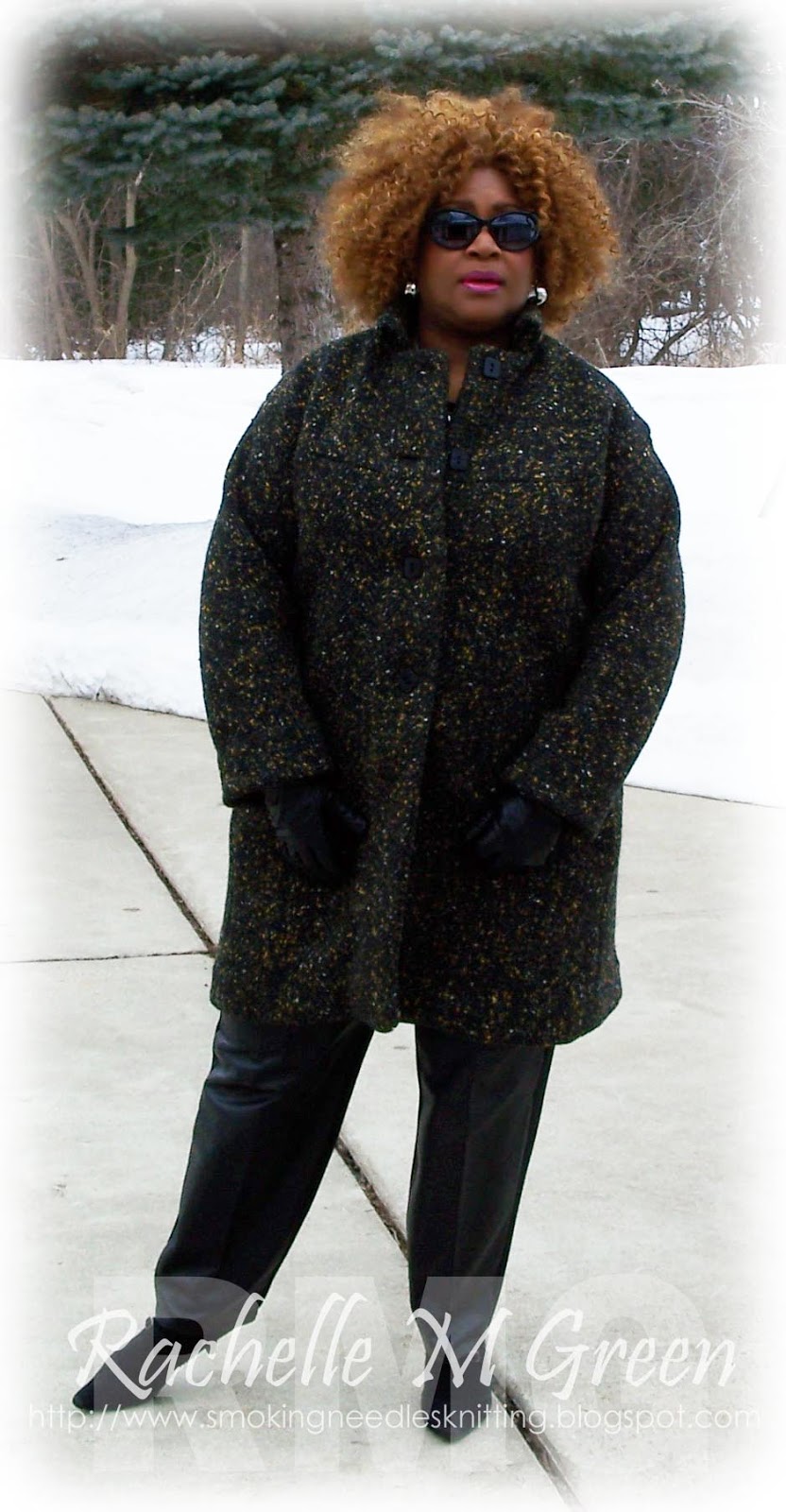 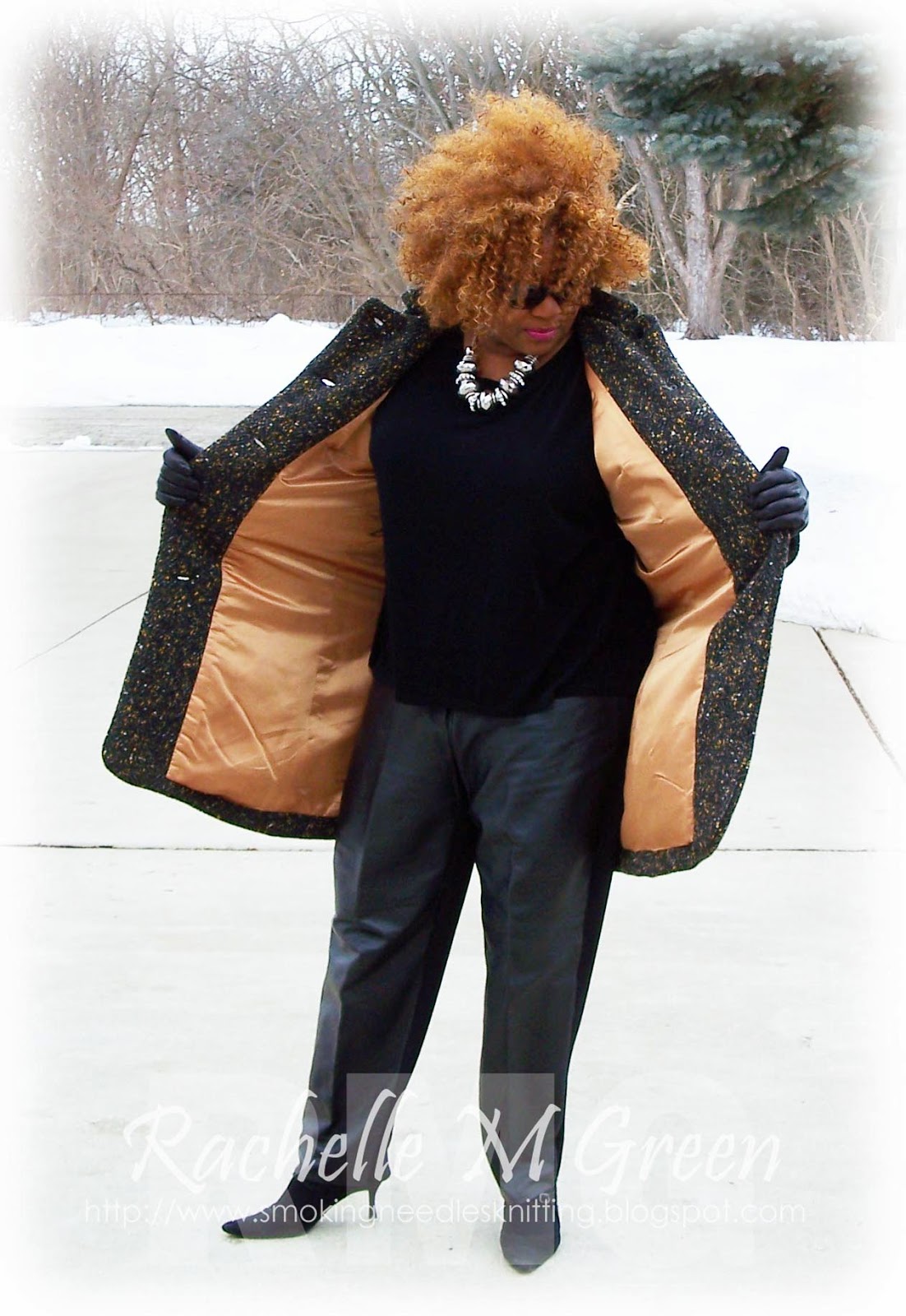 Before adding the lining and front facing I had resigned myself to having to do some major alterations but after, I breathed a sigh of relief at my insight. The FBA I made on the pattern was right on time. Once I added hems to both coat and lining, trying it on was like a giant "bear hug!" I love this coat. The sleeves along with the yoke and deep pockets were a "win-win" in my book. The yoke assured there would be not frustration over too much ease in the sleeve cap. But once again the bulk of the fabric meant no "bagging" the lining. The lining is a perfect fit. As suggested I did use "sew-in" interfacing or rather in my case Batiste fabric. For the sleeves and hems I used fusible. In the photos,  I'm wearing it with my refashioned leather pants 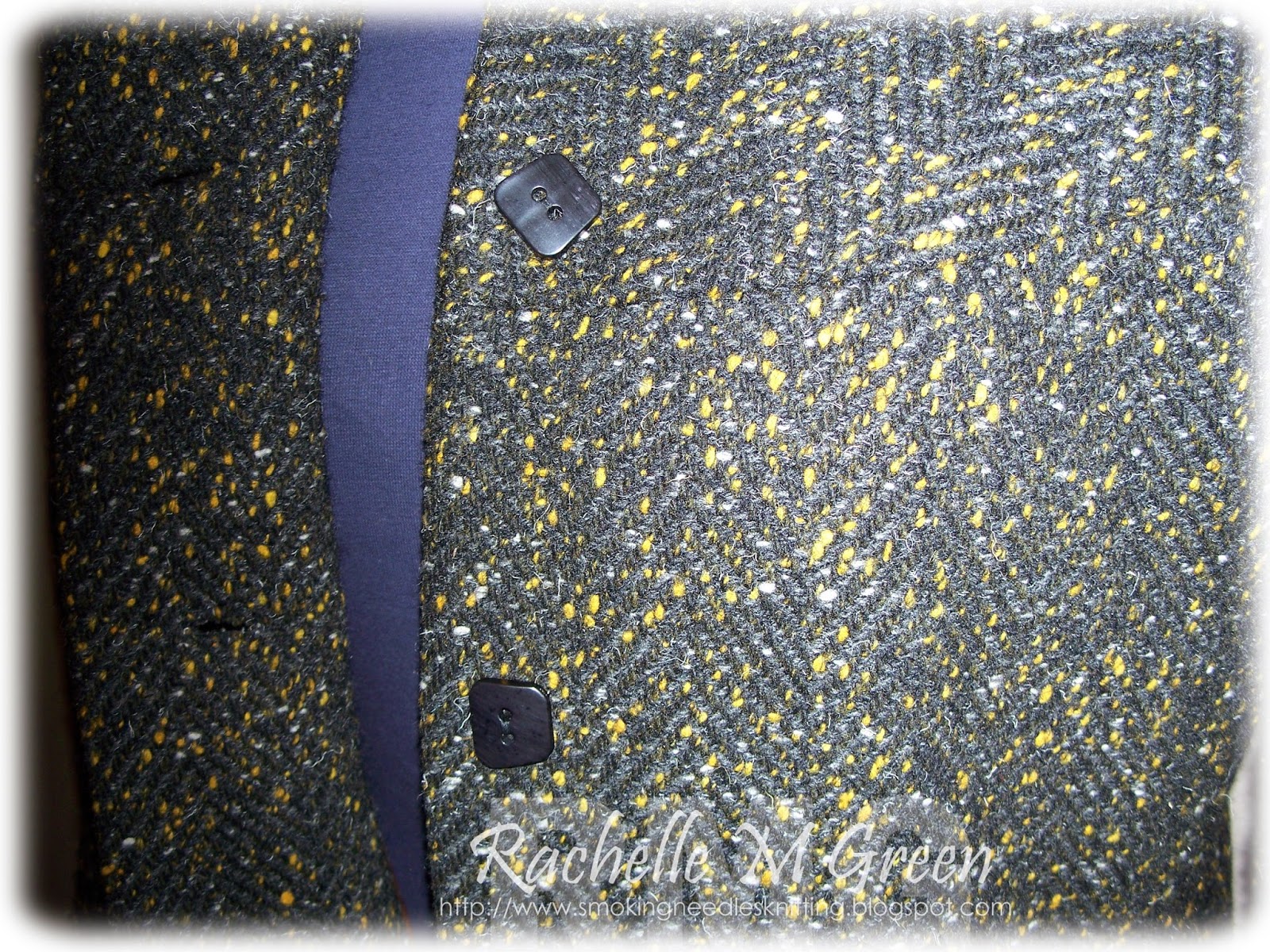 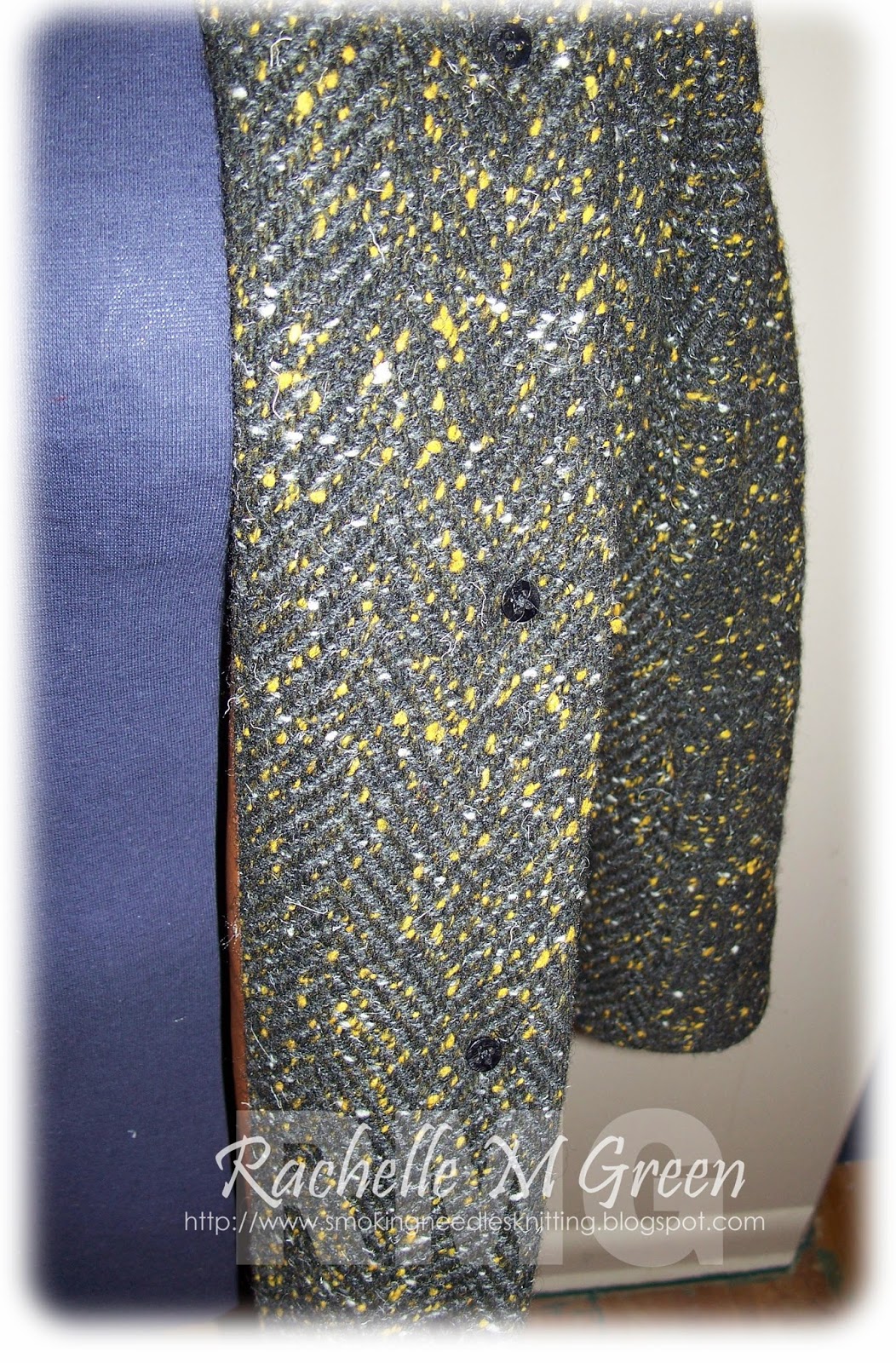 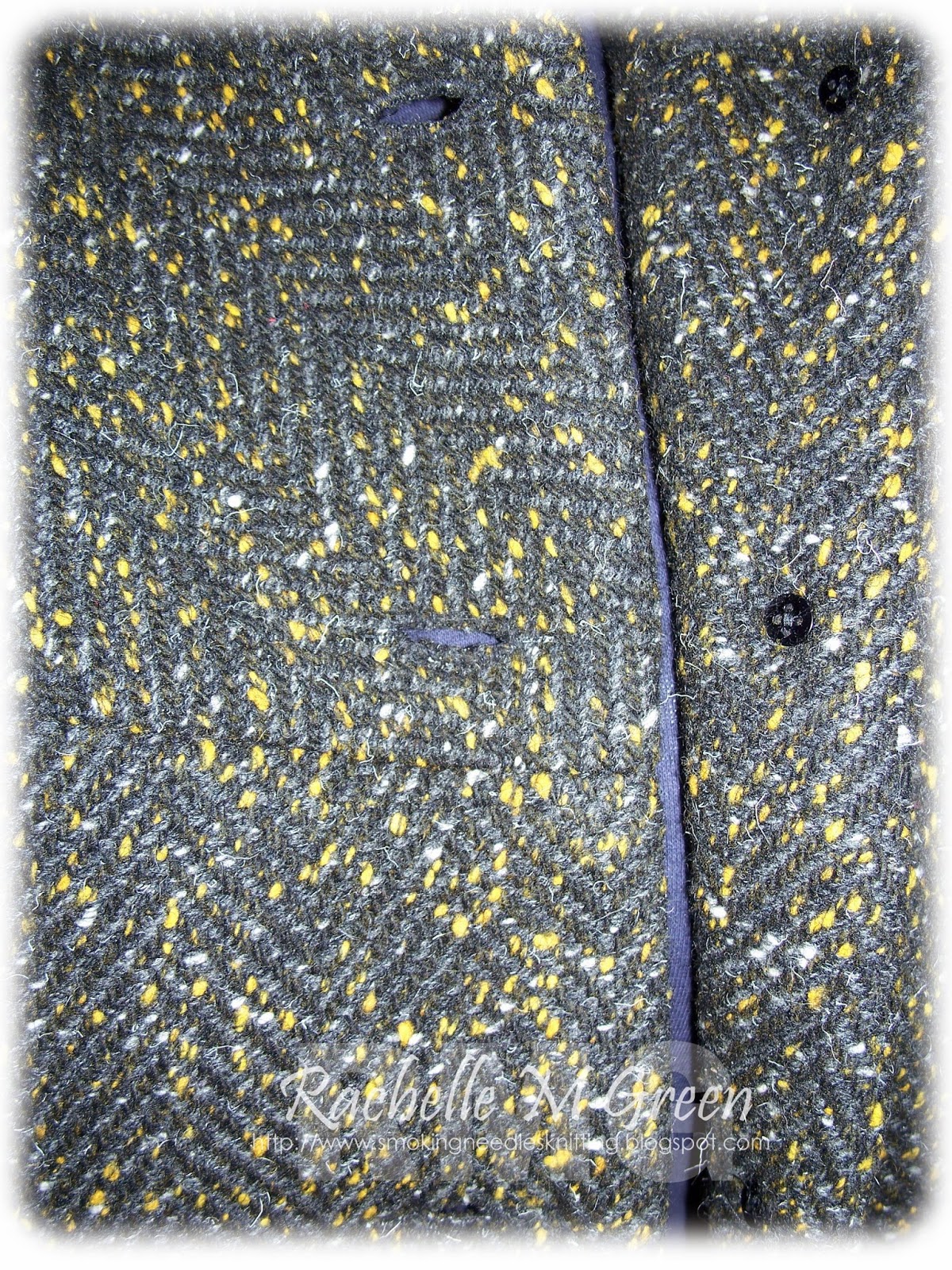 Using the built-in buttonholer on my sewing machine was impossible so I devised a way to stitch a buttonhole manually.  I used a 1mm zigzag machine stitch and later added a manual buttonhole stitch around it. The buttons are from Dritz. I added smaller buttons on the back for less stress on the fabric when buttoned. 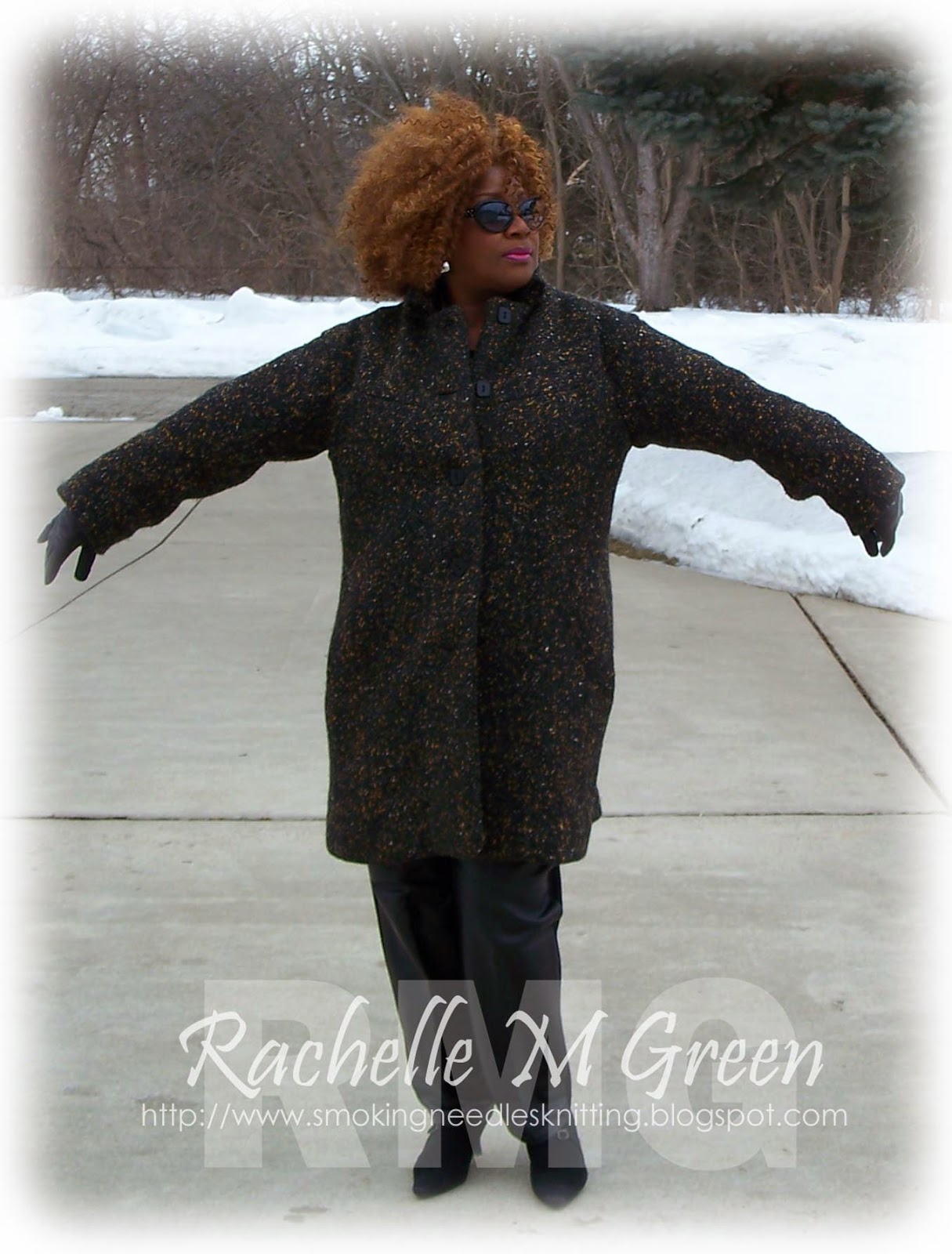 You can see more construction photos at Flicker

Before I leave I'd also like to show the Barbie of the week. Actually I need to post two because I didn't post one for last week. The Barbie of last week is actually Brandi the singer. Brandi has fully articulated arms and even sings a Christmas song. Her hair has been braided into hundreds of braids. I made her dress and jewelry. The pattern is Simplicity 5785 view E. The pattern is from the Simplicity archives and is exactly as it was in the original release circa 1960. The fabric is quilting cotton with satin ribbon at the waist. I used  20 gauge wire for the jewelry. 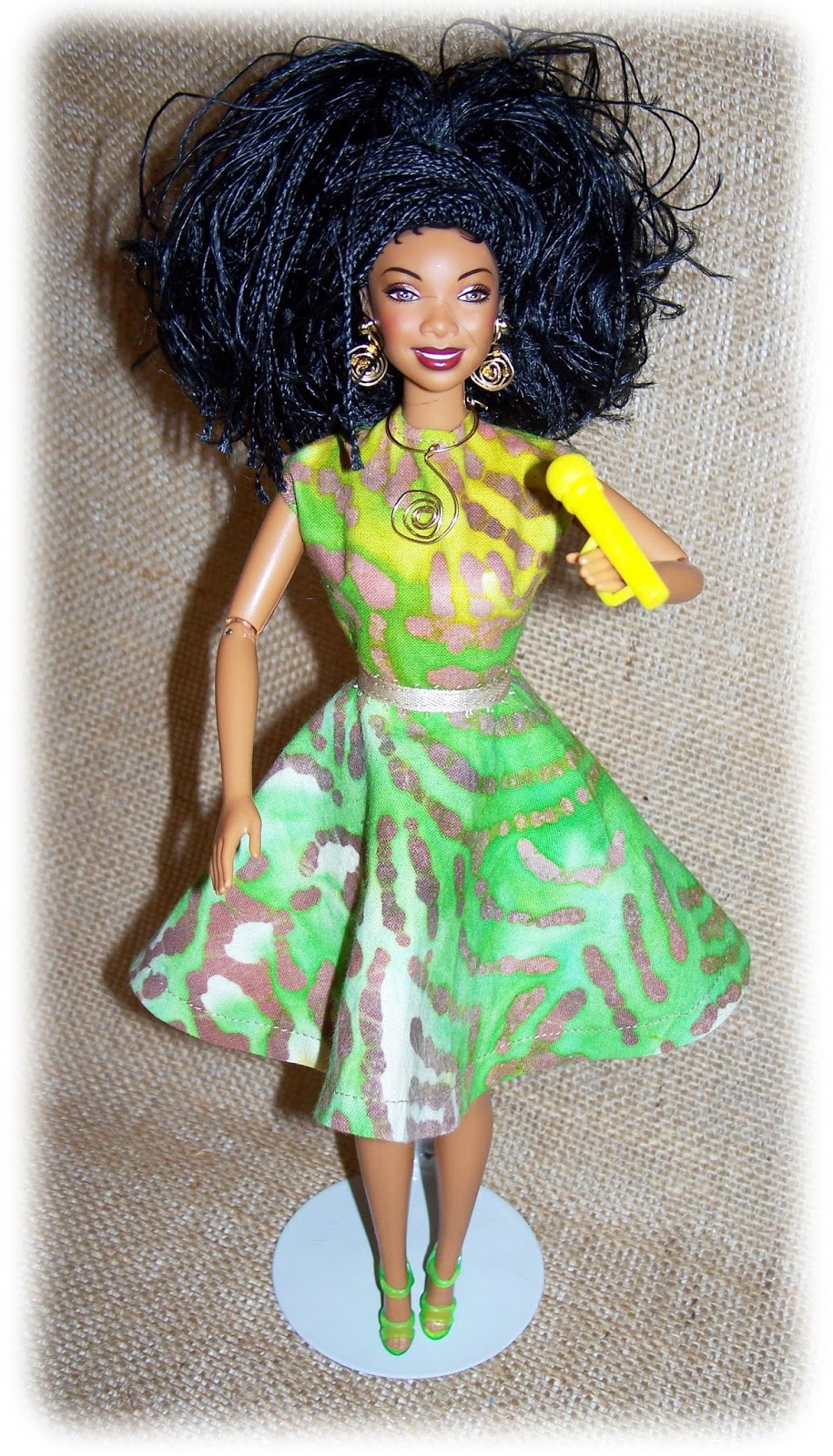 Barbie of the week

This Barbie is a "rebodied" Brandi with a Teresa head. In plain English it's two dolls with swapped heads! She's been renamed by me to Meaghan. I rebodied her with a Brandi that had fully articulated arms and legs. 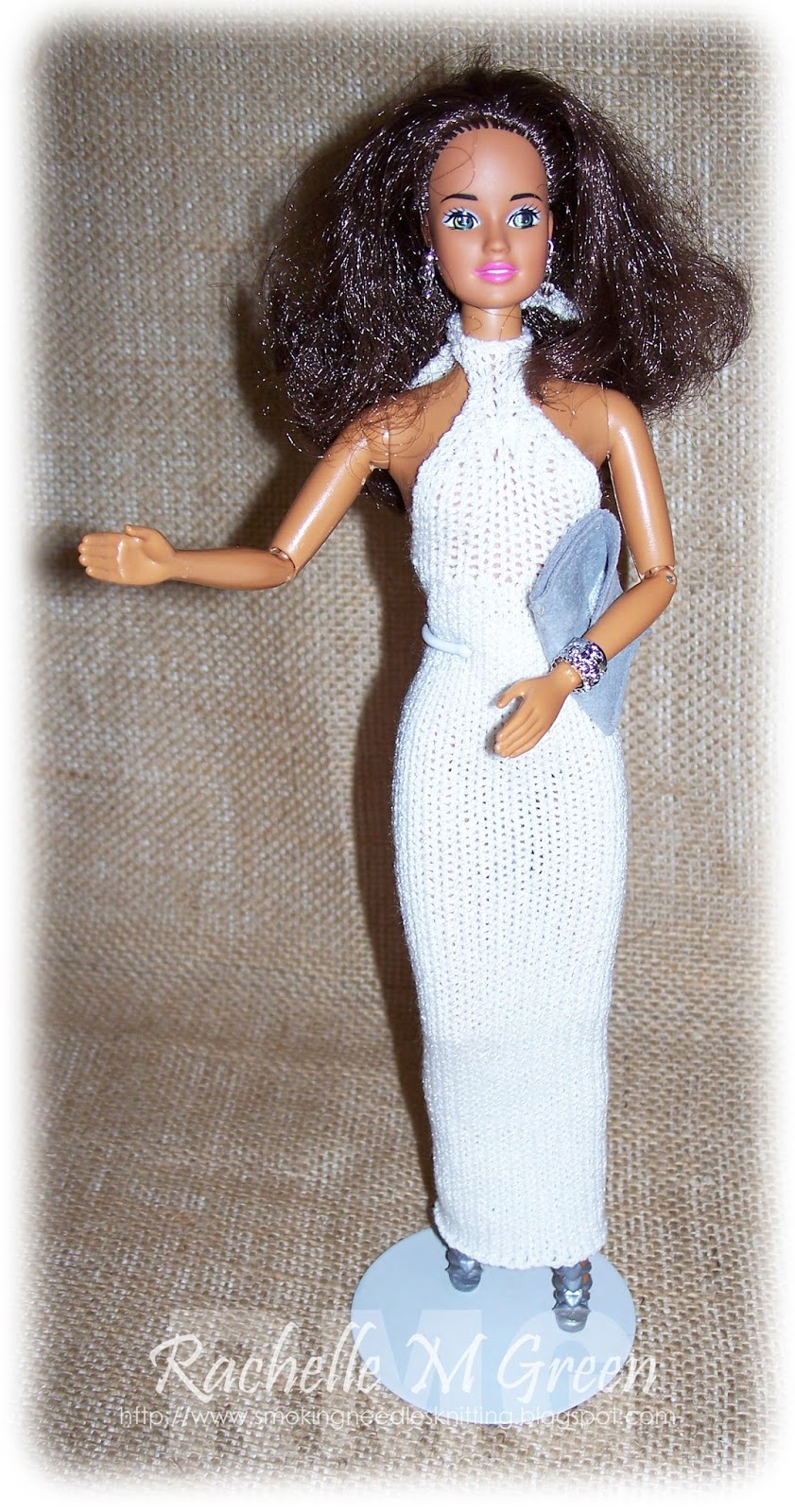 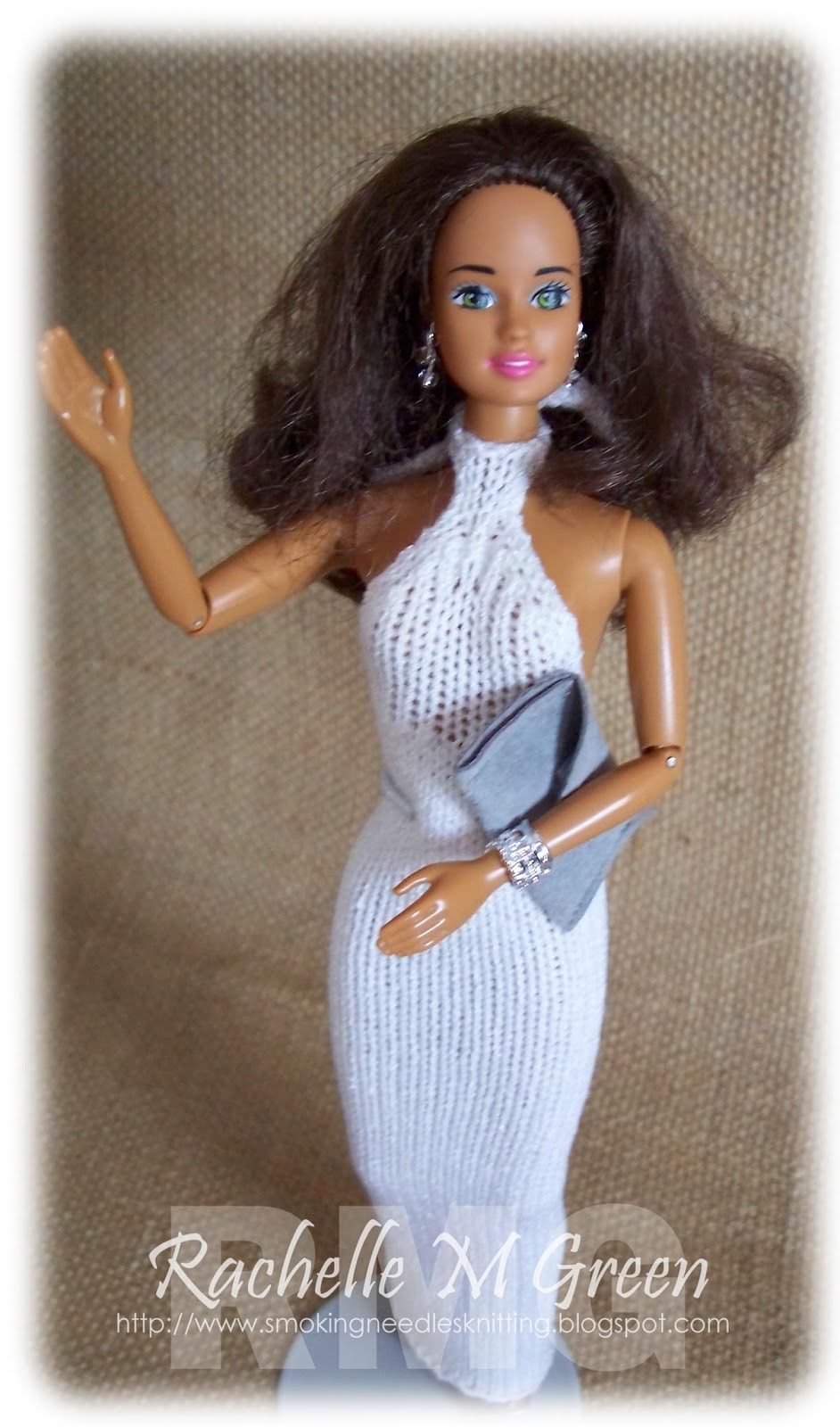 I machine-knitted her floor length "body con" halter dress and sewed the ultra-suede clutch.The earrings were also made by me. I imagined her wearing this to an Oscar "after party" last weekend. 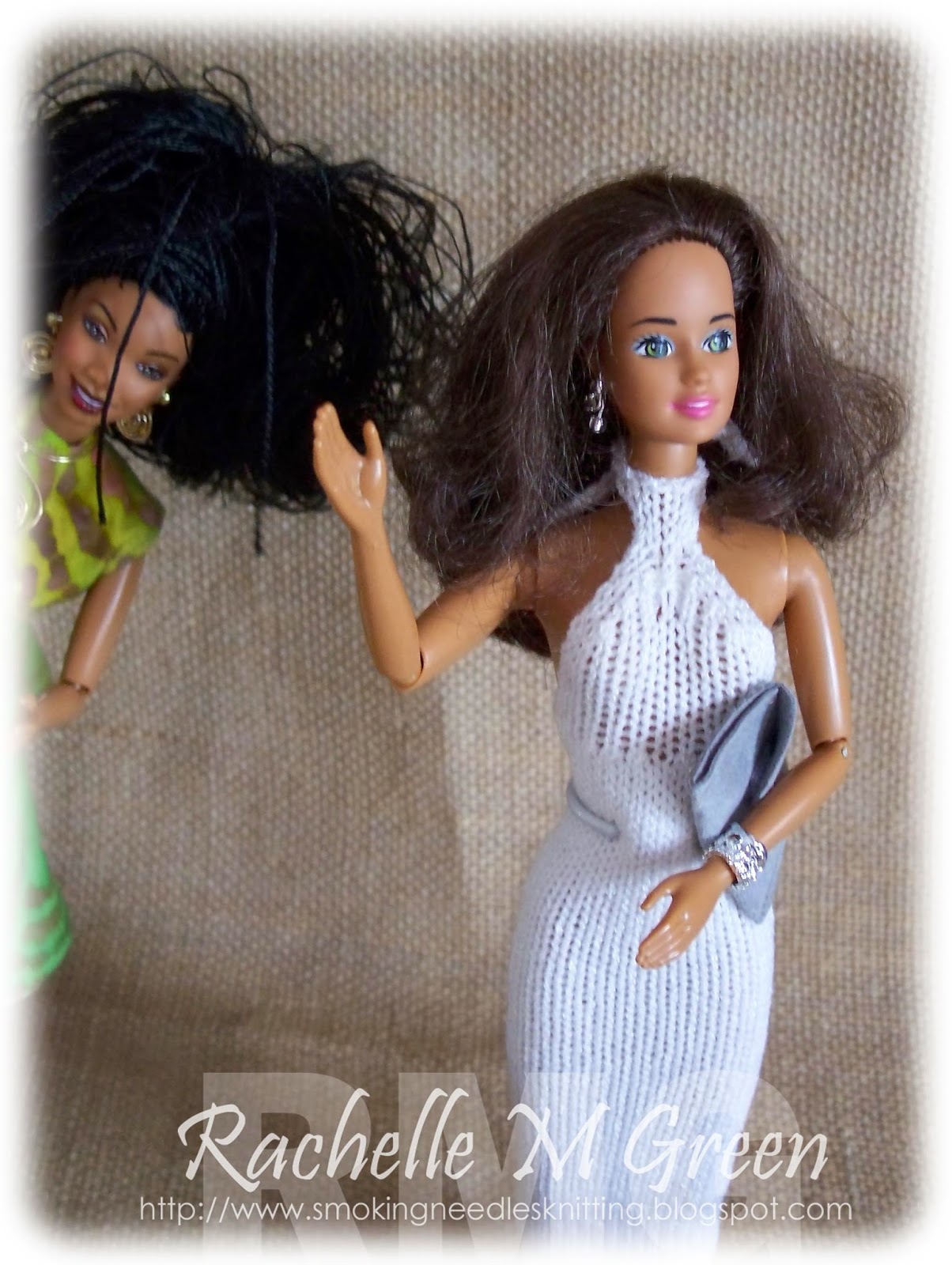 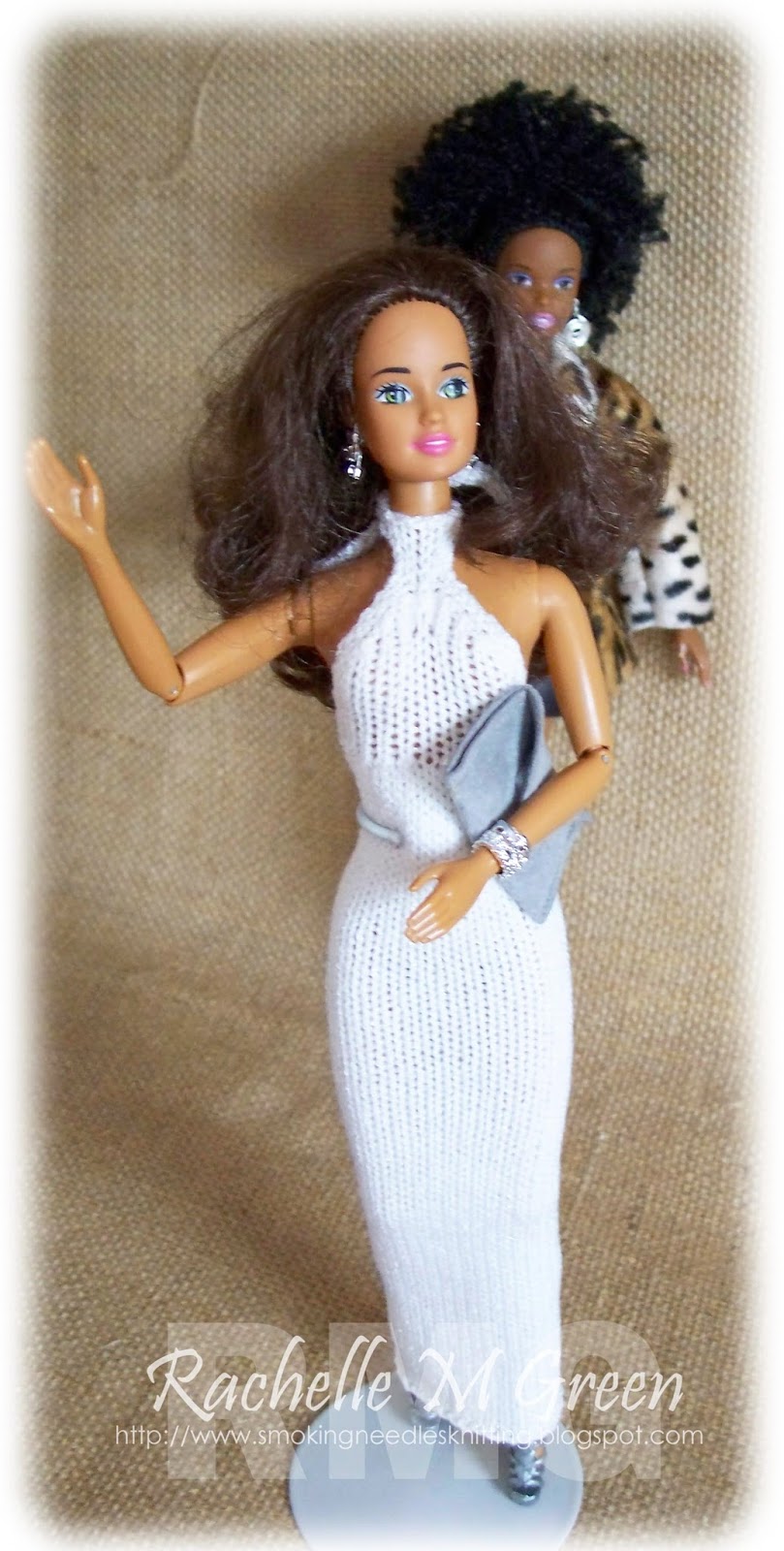 In trying to steal her thunder Brandi and another Barbie ("Asha" renamed by me) couldn't help but photo bomb her!

Well the husband and I had a photo session today with my Vogue 1320. Of nearly 30 shots, this was the only decent one??!! 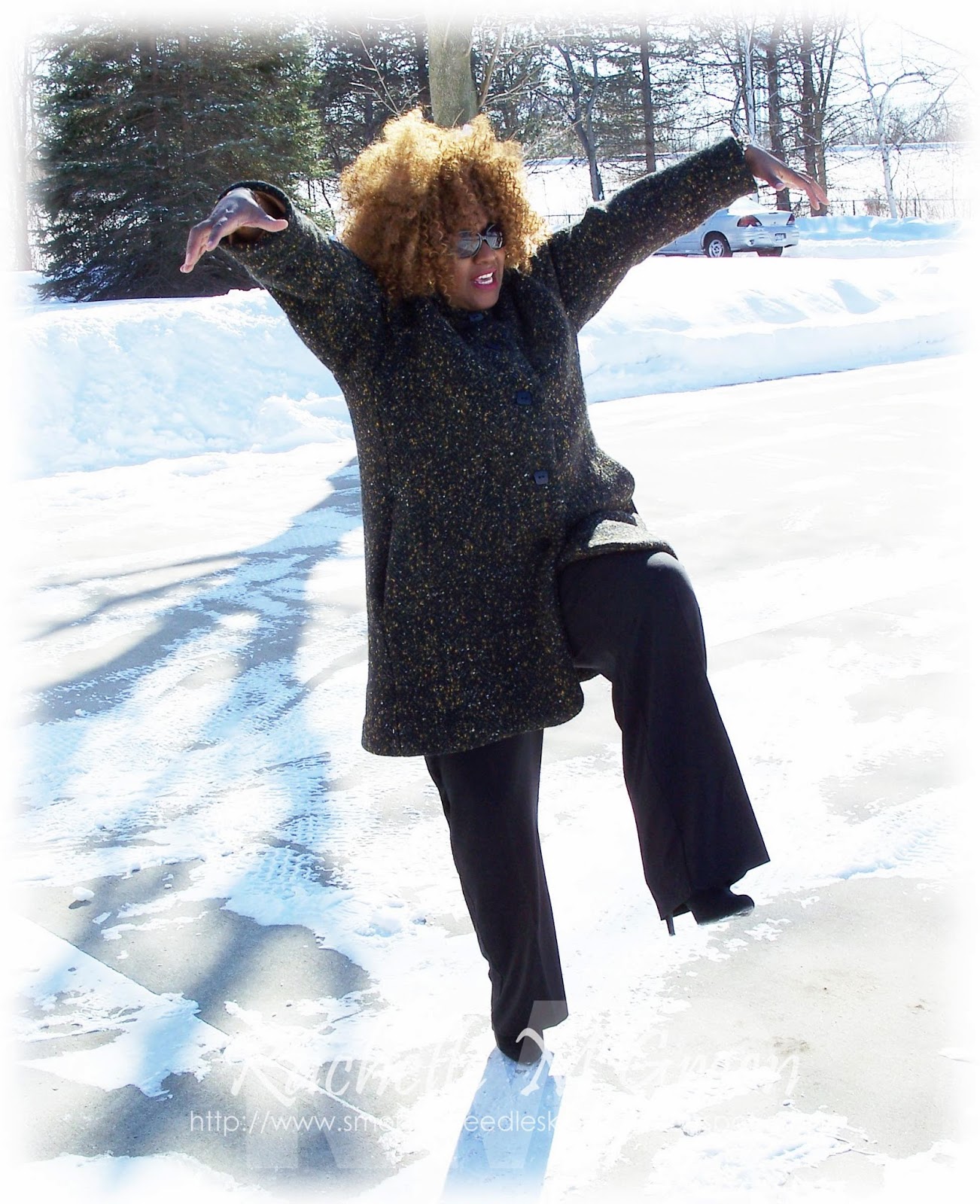 What the heck am I doing and why is he photographing it?  We'll have another photo shoot tomorrow. I will add that the coat passed the wear-ability and comfort test with flying colors!