I went to see a surgical oncologist on Friday. The good news is that my cancer has not spread. The bad news is I was supposed to see at least two other specialist before my apppointment with him. So I still don't have a surgery date. He says it appears that I will just need a lumpectomy and not a mastectomy. Yipppeee! I like my boobs just they way they are...really! Anyway after seeing my last year's films and comparing them with this year's I think the problem is that I've probably had cancer for more than a year. In my opinion it was missed last year and now there is a mad scramble by the imaging center to cover their asses. That is why the miscommunication on the doctor appointments. The imaging center is making all the referrals and informing my doctor afterwards! Just knowing the it hasn't spread is a huge weight off my shoulder. I've been able to get my focus back and what better way then by finishing a project and writing another review! 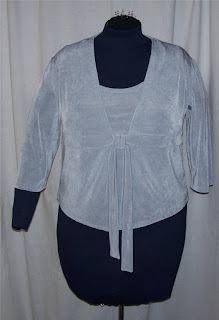 Did it look like the photo/drawing on the pattern envelope once you were done sewing with it?Yes

Were the instructions easy to follow?Yes except how to attach the ties that was very wishy washy

What did you particularly like or dislike about the pattern?I like the fit especially of the tank top. If you want the cardigan to fit like the one on the pattern envelope I suggest you make it one or two sizes smaller

Pattern Alterations or any design changes you made:After finishing I decided I didn't like how high the neckline was on the tank top so I changed it to a scoop neck. I should have made a high round back adjustment on the cardigan but thought I didn't need one because I used a knit fabric. I was wrong. I also wound up cutting the cardigan down about a size because I didn't like the loose fit.

Would you sew it again? Would you recommend it to others?I'd sew it again but I would change how to assemble the ties. I would sew the ties opposite of what the pattern calls for meaning I would sew the right sides together between the upper and lower cardigan front. That way you can hand sew the inside tie in place on the wrong side instead of the right side. I think it would give it a much more professional finish.

Conclusion: The tank top will be my TNT pattern but will use the scoop neck that I changed it to. I'll make the jacket again also with the changes I suggested

Posted by knitmachinequeen (KMQ) at 8:25 PM