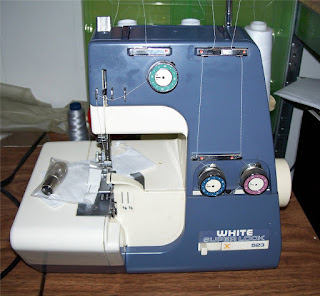 Today I picked my serger up from repair. I've had this machine for over 20 years and I totally abused it. It was not outright abuse but in the 20+ years I've owned it I never, I repeat, never oiled it or even took it in for a routine cleaning. It still had the original light bulb that was working just fine. A few weeks ago it started making a weird sound so of course I doused it with oil. Last week it started really laboring so, filled with shame, I took it in for repair. Then I did the unthinkable...I starting looking at the Viking 936. The only thing about the Viking that was attractive was the coverstitch capability. I was almost hoping the this machine was unrepairable...some friend I am. I was ready to kick this little machine that I've used like a borrowed mule to the curb and spend $1500 just for coverstitch capability. Yikes! Today when the repair guy called and said my machine was ready I forgot all about coverstitching. The complete cleaning and tuneup was only $134. I am oh so glad I came to my senses.
I made two muslins today. The pattern is Butterick 5941. It's probably OOP but it's a simple unlined jacket, below the waist with a collar. It has a horizontal dart at the side seam at well as vertical darts in front and back. I tried making it about a year ago and was not happy with the results. It's a pattern I had a duplicate of so I decided to start over from scratch. Now that I've spent a considerable amount of time studying and learning fit, as I was trimming the pattern I immediately spotted a stumbling block. On what planet is this back and front pattern piece supposed to fit together?? 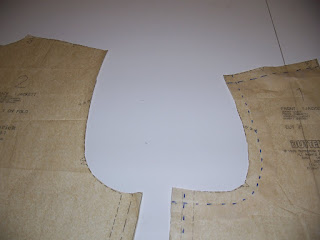 A back armhole is supposed to be only about 1/2" longer than the front armhole! Even with the shaping of the front armhole there is almost a 2" difference. I took a tuck across the back and that did the trick. I made a FBA, wide and high round back adjustment but still need to add about 1/2" at the front armhole notch. I have solved the twisted sleeve problem I was having. Solved that myself as everybody's solution was to rotate the sleeve in the armhole. The problem was that my wide upper back was stealing fabric from my sleeve. Problem now solved. So far this is what I have. After some bust dart adjustment, I plan to cut my fashion fabric tomorrow. 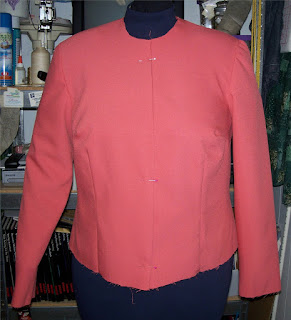 Posted by knitmachinequeen (KMQ) at 1:21 AM