So where have I been? For starters my disappearance involved a masked bandit! 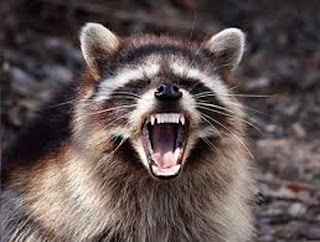 That's right. A raccoon got into our attic. He or she, somehow got in through some loose soffit between the roof and the siding. I first heard something last week when the husband wasn't home and quite frankly I don't think he believed me. In the wee hours of Monday morning I heard lots of scurrying overhead and after a sharp elbow to the ribs, woke the husband from a deep sleep and demanded he go and do away with whatever it was. For all you critter lovers out there I'm happy to say that said raccoon did not suffer. A single shot between the eyes with a .22 rifle and there will no longer be the pitter patter of little feet in the Green attic. And what does that have to do with me be away? In order to access the attic my desktop had to be moved. So I've had no internet access.

Tomorrow between 9 and 11 my new bedroom furniture is finally being delivered. Hurray! It couldn't have come at a better time. The husband is threatening to throw me and all of my crap out of his room. July 1st to August 8th was a very long time. It will be a while before I attempt anymore decorating. 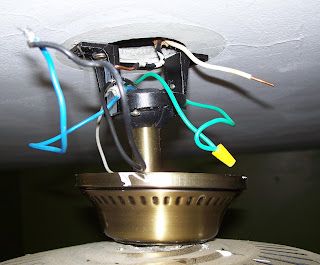 Luckily I had the brilliant idea of taking some pictures when I was changing out the ceiling fan. The hardware on the new furniture is brushed silver and I wanted the fan to match. I wanted to make sure I got the new one installed correctly so I took some pictures.  Enter helping hand of husband ( I didn't ask).  Need I say more? It was not until I showed him this picture that he believed me when I said "the white is the hot wire!" 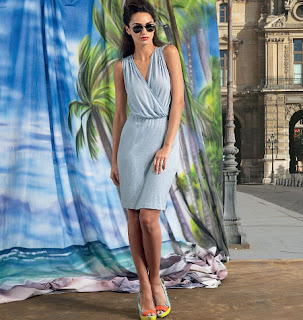 On the sewing front I just couldn't wait any longer. Last Friday I made McCalls 6752 out of fabric Shelia sent me last year. I think I was jinxed from the beginning. I had to cut the fabric on the dining room table. It is something I've never done before and plan to never do again. After cutting the fabric, my back was hurting so bad I had to take a muscle relaxer. The dress went together easy enough but I don't love it.

I made my usual 1" FBA and raised the armhole one inch. I also lengthened the skirt four inches. I now think I should have omitted the FBA and raised the armhole at least two inches maybe even three. I omitted the elastic and also need to rethink that. There is just so much fullness in the bodice that I just don't love it. It's not quite a wadder but needs some serious work. It needs work that cannot be attempted with the crap from the bedroom laying around like land mines on every available surface.

I've been searching high and low for this Simplicity pattern that I know is a part of my stash but for some reason I can't find. I'm glad I settled on Butterick 5522 instead. 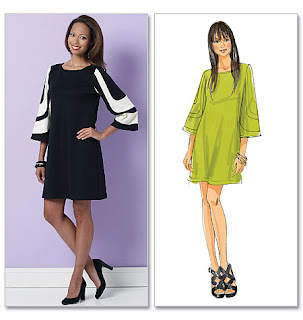 After looking at the line drawing for the Simplicity pattern, it wasn't what I really had in mind. I want to use a knit fabric purchased in New York last year to make a simple shift dress and I think the Butterick pattern will fit the bill. I'll omit the sleeves, lower the neckline, raise the armhole and bind the neck and armhole edges with foldover elastic. It shouldn't take more than an hour. Wish me luck!

Posted by knitmachinequeen (KMQ) at 12:41 PM