as in "I'm done" not as in finished. I'm wondering how such a simple pattern (McCalls 6122) could kick the livin' crap out of me. The first time I made it, it only took about four hours.

This time it took me about two weeks to finish. Don't get me wrong I love the finished blouse--the fabric print and the style--it's the getting there that beat me up.

I refuse to have UFO's layimg around so I could not move on to another project until it was done. It should have been a breeze; I don't know what went wrong. From  the onset it wasn't good. I didn't have quite enough fabric to make the belt so I opted to cut the tie as long as I could as two separate pieces and figured I could sew them into the side seam.

That worked out good except when I tied it, it caused the back to bunch up at the waist and create a pool of fabric that was not attractive at all. Unfortunately I don't have the before picture but here's the after.

Not perfect but a lot better than it was. I'm not sure what the correct alteration would be but here's a picture of how I fixed it.

Starting a short ways from the side seam, I sewed a crescent shape from side seam to side seam along the back waist seam. Then I remembered that the pink plaid version was a little tight across the upper back! Yikes! The homespun at least was loosely woven and had some give, this fabric has none. It might be kevlar--as in bullet-proof. I think it looks good but I feel like I'm in a straight-acket. If I so much as cross my arms I am going to "Incredible Hulk" out of it. You know the feeling and I can feel you all laughing at the thought!

Next I got the facing and collar attached and let me tell you...it ain't pretty. Once again I referred to the pink plaid and yep, there was some craziness going on there too. Why didn't I remember all of that? Was I so enarmored with the pink that I totally forgot?

Inside collar...don't ask! It won't be seen. 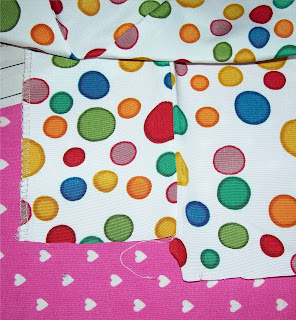 Too short facing was an easy fix.

As if all of that wasn't enough, I'm thanking my lucky stars I decided to make the concealed front button closure. I could not get three out of the four buttonholes to stitch out correctly. My buttonholer did not like that extra fold of fabric. I wound up having to pick the buttonholes out and do them over. That was a thankless job. It's not pretty but nobody can see it. Finally when I thought nothing else could go wrong, as I was getting ready to pose for photos I noticed this at the center front peplum. 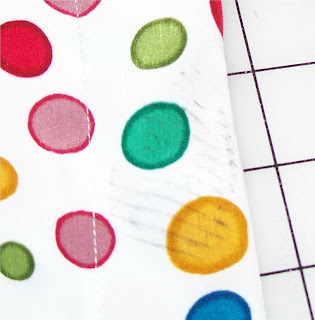 Is that part of a shoe print?? WTH! The only consolation is that the tie will cover it. Even with all the headaches and complaining I think this blouse looks fantastic with these slacks. This is one of the few pair that I can still wear. If you look closely at the back view, you'll notice that the slacks are a little big. I  made them about 18 months ago out of the "Paper Tape Pattern" I drafted. I think my next project will be a pair of slacks from the same pattern with some minor adjustments and hopefully a better fit.

Notice the "hair"? My husband calls me "Curly Temple" whenever I wear it!

Posted by knitmachinequeen (KMQ) at 9:31 PM