I know Faye has proclaimed November, Month of Tops, but I seem to be stuck on slacks. I misplaced my beloved TNT slacks pattern in moving. I had traced it but something must have gotten lost in translation because the pair I made from the tracing were not to my liking. Partly do to meds and partly due to my eating like a pig, I did manage to pick up a few pounds. Not so many that I should have had to make drastic changes but something isn't right. In the past week and a half I have made four pairs of slacks. Here's the first pair. 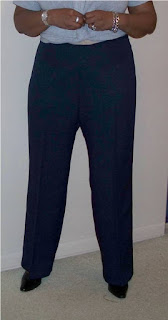 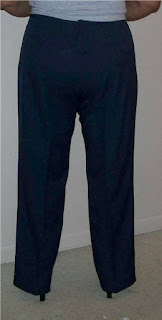 With some work, this pair is salvageable. The front crotch is too long, the back crotch is the wrong shape and the waist is about 2" too big and that's with 1" center front seams. The only thing I like about these is the side seam zipper. It's perfect. I had to go back to the drawing board. I did realize that I don't need to add to the crotch points. Those dimples in the front crotch are a result of too much crotch point. The pictures are doing the fit justice. The slacks look much worse in person! I haven't given up. I've just begun to fight!

Posted by knitmachinequeen (KMQ) at 9:19 PM