After making the white dress, I realized I absolutely HAD to have a jacket to match. So with only two days to go I decided on McCalls 5936!  It shouldn't surprise you that everything came from my stash. I'm not sure what the fabric is but I think it's some sort of double woven cotton. It was a breeze to sew.

As I normally do before starting a project, I consulted PatternReview.com to find out if there was anything I needed to be particularly mindful of. Just from reviewing the photos, I knew the bodice ran particularly short. Aside from having the bust fit perfectly my next pet peeve is waistline placement. I'd rather have less than perfect seams than improper fit.

After making an 1 1/4" FBA, lowering the bust point 1" and adding an additional 1 1/2" length above the waist, this is how the front and side front pieces looked. I have scissors and tape and I'm not afraid to use them. 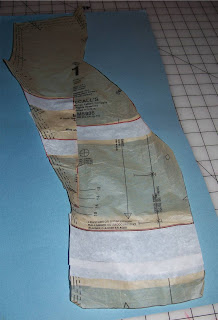 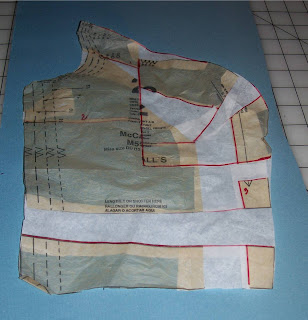 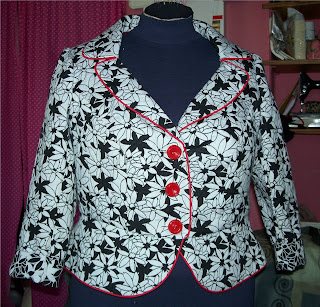 I added cording to break up the pattern a little, to match my shoes and just because I could! Although the pattern  only called for two buttons, I planned on using three. Even on the pattern envelope, the two buttons look to be spaced too far apart. 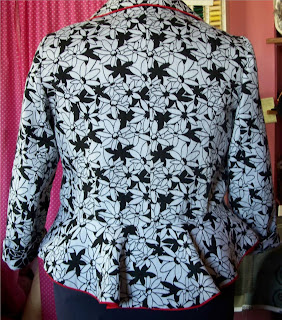 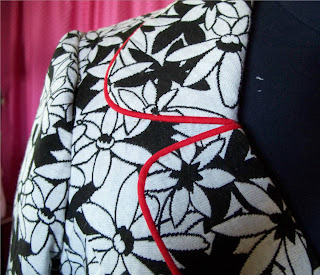 I love the red lining 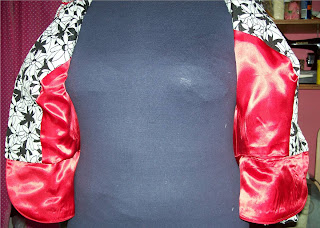 I didn't line the sleeves because I intend to wear them rolled up not to mention I probably didn't have enough fabric anyway. I thought it would be a nice touch to show the constrast of the wrong side. It didn't quite work out as I planned because the difference is too subtle when looking at such a small portion of the overall effect. Although this is one of the most comfortable sleeves two-piece sleeve I've ever sewn, the cap was extremely poorly drafted. The cap was so much larger than the armhole that I had to trim it down. Unfortunately I didn't measure it during the fitting stage. I channeled my inner Tim Gunn and made it work. 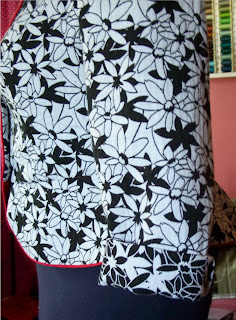 Modeling or whatever it is I'm doing!

Now that I look closer at the photos, my dress was getting "butt sprung" before leaving for church. The only time I sat down before these photos were taken was to put on my shoes! YIKES!

After church, keeping the white dress on was not an option. To the rescue was Simplicity 2648--my LBD. I really like the fit and the peplum is so on trend. I'll make it again but will reshape the peplum to lay flat.

Posted by knitmachinequeen (KMQ) at 1:47 PM