Pattern Description:
Close-fitting, mid-knee or below mid-calf length dresses. Features bodice with pleats, darts, midriff, yoke, topstitched trim and back zipper
Pattern Sizing:
6-20
I sewed a 14 through the bust gradually going out to a 20 at the hips.
Did it look like the photo/drawing on the pattern envelope once you were done sewing with it?
I think it looks exactly like the pattern envelope. What do you think?

I didn't follow the instructions because they have you sew the bodice together and then attach it to the skirt. I don't like that construction at all. I sewed the front together then the backs and then pin-fit the side seams. I construct most dresses this way.
What did you particularly like or dislike about the pattern?

I liked that there were pleats under the bust instead of a dart. With my cup size it is nearly impossible to sew one dart in such a a way that it isn't pointed at the end.
Fabric Used:

The fabric was from the clearance table at Joann's. It was called Ottoman "something". It is a polyester and spandex blend. The fabric was very easy to work with and is as comfortable as a nightie.
Pattern alterations or any design changes you made:

Before starting I had to make my usual FBA. I made a 1" FBA with a dart at the side seam and then rotated it to under the bust and turning it into an additional pleat. Now instead of having three pleats at the underbust like the original pattern I have four. This is what my upper bodice piece looked like after the alteration. 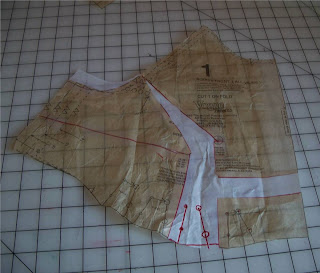 I also raised the armhole about 1". All summer I've been forgetting to do this alteration and wide up having underarm flab showing or way to much bra.
The dress called for a back zipper which I originally installed but wouldn't you know it had a very warped look. I wish I had followed my first mind and omitted it. As I was removing the zipper I realized the warping was operator error...who'd a thunk?? I do need to work on the center back seam because there is something weird going on where the bottom of the zipper was. I think the camera flashed before I was ready!

Would you sew it again? Would you recommend it to others?

I will definitely sew this again. I may sew it again as my very next project.
Conclusion:

Posted by knitmachinequeen (KMQ) at 4:59 PM