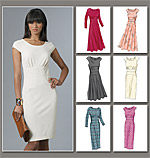 I finally got some sewing done. I'm working on Vogue 8685. Can I say I love it? Yes I do! I picked the fabric up at either JoAnn's in the clearance area or Walmart. I don't remember. I know that never happens to you, right? I don't have any pictures but hopefully tomorrow.
Although the pattern has quite a few pieces, it went together fairly quickly. It has lots of topstitching and I was worried that the midriff is not lined and the weight of the knit might need it. It didn't. I did make an FBA because frankly, I am obsessed with not having any pulling across the bust. Once I made the FBA, I then had to alter nearly every other pattern piece for the dress to fit together correct...it was worth it. The envelope describes it as close-fitting, that may have been an understatement. Let's just say I'm glad I don't have a problem wearing shapewear! I wish I had followed my first mind and eliminated the back zipper. Although the zipper installation was a breeze the finished look isn't. I didn't interface the zipper area because the knit I used was quite substantial, I got one really warped spot that is going to necessitate me removing the zipper. I'm able to get the dress on with the zipper zipped up so it won't be a problem. Oh and I finally remembered that most sleeveless or near sleeveless style armholes are usually way too low for my liking so I raised the underarm 1" and it is absolutely perfect...or is that just me??
Now on to my musings...
That's all for now. Y'all come back now ya hear!

Posted by knitmachinequeen (KMQ) at 1:21 PM