I know I should be working on my dress for the wedding, but I'm not. I going to start it on Monday. In the meantime I finished a dress and am working on a blouse...McCalls 5522. The jury is still out on the dress. I like it and it's very comfortable but reminds me of a house dress and I think I look pregnant! 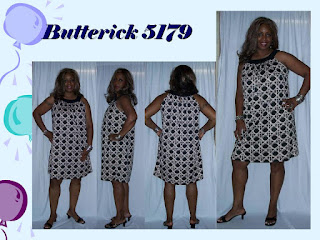 Pattern Description:
fast and easy misses/misses petite dress
Pattern Sizing:
8-22
Did it look like the photo/drawing on the pattern envelope once you were done sewing with it? Yes, exactly
Were the instructions easy to follow? Very
What did you particularly like or dislike about the pattern?
I liked how the dress looked on the pattern envelope. The picture is deceiving because the dress is quite voluminous
Fabric Used:
I used an interlock knit for the dress and stretch twill for the yoke
Pattern Alterations or any design changes you made:
I made an FBA that made the upper part of the dress in the bust area wider but not longer and it worked. I didn't want that pulling of gathers east and west that you often see on full busted women!
I made the yoke a different color and attached the dress to the yoke one inch wider on each side. Beware...regular bra straps will show!
I reshaped the front yoke as it was gaping during tissue fitting.
Instead of using purchased bias tape for armhole opening, I used cut bias strips from the dress fabric.
I also eliminated the back seam as well as zipper. I don't even know why one would be needed???
I made a faced slit back opening and added hooks and eyes. Now that it's finished I realized that it doesn't even need a back opening at all. It could easily be slipped right over my head.
Back neck opening
I added 2 1/2" to the dress length. I would have preferred it a little longer as it is I only made about a 3/4" coverstitch hem.
Would you sew it again? Would you recommend it to others?
I don't think I'll sew this again because it feels like a house dress and I think it makes me look pregnant!
Of course on really warm and humid days this dress will be a godsend!

Posted by knitmachinequeen (KMQ) at 6:16 PM