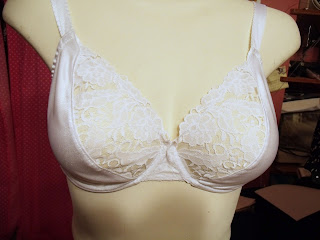 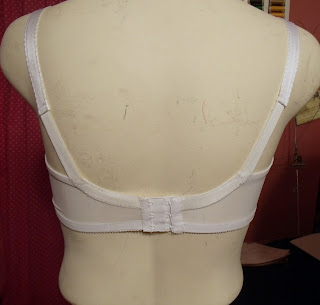 Last week I made three bras. Two were keepers and one went the way of bras that just don't fit...in the trash. I did salvage the closure and the strapping elastic. I did learn how to successfully change a full band bra (Queen Bra Elite) into a partial band bra. It was very easy once I understood the difference between the two. It was very comfortable even after wearing it all day.

I have learned that getting the perfect-fitting bra takes time...lots and lots of it. There is absolutely no way to know whether the bra is going to fit until the entire bra is completed. Always, always, always use the suggested fabric for your bra. Changing the fabric can change the entire fit of the bra. Ask me how I know! There do seem to be some shortcuts for a toile bra, but I prefer making the "real deal."

Can we talk band size? Where in the hell did the notion of adding 4" to your rib cage measurement come from? There is quite a bit of elastic and powernet on a bra. I think there is more than enough ease without adding 4". I recently had a conversation with a high schooler. She wears about a size 4. She had been "professionally measured" at a size 38D. No freakin' way. Sure she had large breasts but she was a tiny little thing and her rib cage could not have measured more than 32"!

In the last two months I have spent about $200 on bra making supplies. Has it been worth it? Of course. The thought of having bras that fit better than anything I can find in the store makes it all worth it. I spend about $40 each for the bras I usually wear and yes, I buy more than five bras a year. Last night I painstakingly figured out how much each component of a bra costs:


Five dollars and twenty-seven cents for a custom-made underwire bra! It's absolutely worth it. I will continue   to try for better fitting bras. So far the Queen Bra Elite is pretty near perfect fit with the Kwik Sew 3300 being a close second because it just pretty! I have to start making matching panties as well. Stay tuned for more bra-making post.

Posted by knitmachinequeen (KMQ) at 8:25 PM