I must admit that I haven't been very productive lately. The same top, dress and slacks are still on my sewing table. It's not that I'd lost my sewjo, it just that I've been doing other things and I was once again having computer problems. The computer problems ar totally solved thanks to a super new computer! I been spending most of my time making cards and golfing. You really should check out my other blog, "I'm Black Martha", where I post my card creations.

So how did I jumpstart my sewing? With panties! That's right. I whipped out my bag of panties where I keep the scraps leftover from my knit dresses. Whenever I cut out a knit dress, I also cut out as many pairs of panties as possoble with the leftovers. I precut the elastic and the cotton crotch as well. Whenever I get an urge for a quick project everything is ready to go. After stitching two pairs of my favorite panties, I proceeded to work on the blouse which now only needs the neck facing. By the end of today I hope to have all the WIP (works in progress) finished so that I can get my sewing table cleaned off and move on to other projects.

I'd made two more maxis before my sewing stalled. Only taking about 30 minutes to sew,  I'm just lovin' 'em. 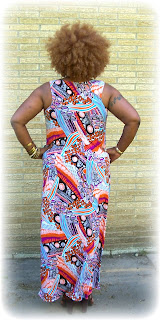 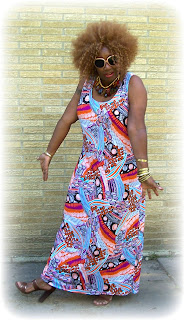 Someone asked how I was finishing my neck and armhole edges. With my differential feed serger set at 1.0, I serge around the opening. I turn under only the serged amount and stitch with a double needle on my regular sewing machine.

This fabric was part of my New York shopping. I think I picked it up in Brooklyn when Shelia took me to some of her haunts.

This fabric was from the 1/2 clearance from JoAnns. BTW George Clinton just called, they are reviving the P-Funk tour and he wants his glasses back! LOL

Posted by knitmachinequeen (KMQ) at 10:38 AM