After all of my ranting and raving about the Amazing Fit I got with the Simplicity slack pattern 2860, Faye asked what I meant by "scooped out crotch." I think part of the reason the 2860 slacks fit so well is that I've finally figured out how to shape the back crotch for my particular figure. 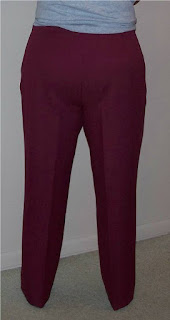 While these don't look too bad, I hate how I get the weird cupping under my butt cheeks. 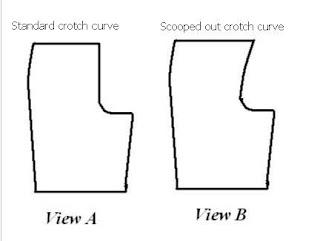 I'm pretty sure it's because most commercial patterns are shaped like figure A. For the Simplicity pattern I scooped out the rear crotch curve to look like figure B. If you think about it, look at your figure from the side. Figure A represents a figure that has a relatively flat rear while figure B represents a figure with curves. FYI I did use the curvy pattern pieces for the Simplicity slacks.

What do you think? Am I onto something?

Posted by knitmachinequeen (KMQ) at 8:59 PM