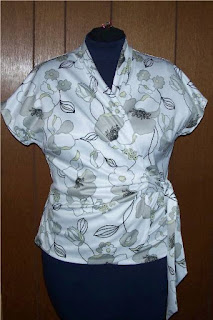 Pattern Description:
Misses' wrap front top with all-in-one sleeve and pleated collar extending into front neckline and side ties.
Pattern Sizing:
XS (4-6) - XL (20-22)
Did it look like the photo/drawing on the pattern envelope once you were done sewing with it?
Yes, exactly
Were the instructions easy to follow?
The instructions were very easy to follow as there are only four pieces but getting the ties sewn on correctly was really a challange.
Tie close up
Frankly if I were a beginner, I don't think I would have ever gotten them on properly. As it was I had to take them off about four times before getting them on to my satisfaction.
What did you particularly like or dislike about the pattern?
In the beginning I didn't like this top at all. After I let it marinate overnight I decided I do actually like it...a lot. I haven't liked wrap tops on myself in the past but this one has really grown on me. It looks very sophiscated. I really like that unlike most wrap tops this one doesn't show any cleavage.
Pleated front close up
The placement of the front loop allows for adjusting the waist.
Side view with loop and tie
Another thing I like is that the ties don't tie in a bow so is less bulky than you might think. The only thing I didn't like was the directions for sewing the ties on.
Fabric Used:
Interlock knit. I fell in love with this fabric and while I originally thought I would make a dress out of it, I'm glad I opted for this top instead. I still have a yard and a half left so have enough for a simple dress. The fabric came from Walmart.
Pattern Alterations or any design changes you made:
I cut the center back on the fold eliminating a center back seam and omitted the back darts then added 3/4" for wide back adjustment. Was there a need for a center back seam. I think not. With this print it would have meant trying to match the print. 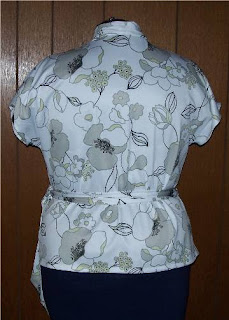 I also made a FBA adding a side seam bust dart.
Side seam bust dart
The added length to the center front that results from the FBA was incorporated into the existing center front gathering. I still think I should have added 1 inch at the front and back waist.
Would you sew it again? Would you recommend it to others?
I'm not sure I'll sew it again but I would recomment it to others just beware when it come time to sew the ties!

Posted by knitmachinequeen (KMQ) at 11:31 AM